Sarah Palin: Obama’s Message to America: The Era of Big Government is Back, Now Help Me Pay For It 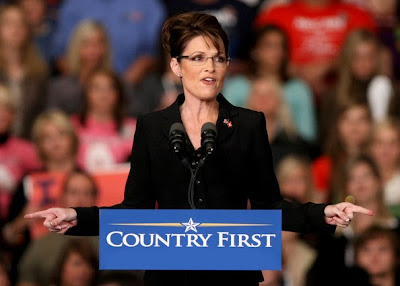 Despite the flowery rhetoric, the President doesn’t seem to understand that individuals make America great, not the federal government. American greatness lies in the courage and hard work of individual innovators and entrepreneurs. America is an exceptional nation in part because we have historically been a country that rewards and affirms individual initiative and offers people the freedom to invest and create as they see fit – not as a government bureaucrat does.

Yes, government can play an appropriate role in our free market by ensuring a level playing field to encourage honest competition without picking winners and losers. But by and large, government should get out of the way. Unfortunately, under President Obama’s leadership, government growth is in our way, and his "big government greatness" will not help matters.

On the heels of her blistering rebuke of Obama's SOTU message on Greta's show Wednesday night comes a more detailed [and devistating] policy statement. Sarah Palin's own State of the Union report, if you will. Here she takes the president's agenda apart piece by piece, offing common sense solutions in it's place.


Obama’s Message to America: The Era of Big Government is Back, Now Help Me Pay For It

The President’s State of the Union address boiled down to this message: "The era of big government is here as long as I am, so help me pay for it." He dubbed it a "Winning The Future" speech, but the title’s acronym seemed more accurate than much of the content.

Americans are growing impatient with a White House that still just doesn’t get it. The President proves he doesn’t understand that the biggest challenge facing our economy is today’s runaway debt when he states we want to make sure "we don’t get buried under a mountain a debt." That’s the problem! We are buried under Mt. McKinley-sized debt. It’s at the heart of what is crippling our economy and taking our jobs. This is the concern that should be on every leader’s mind. Our country’s future is at stake, and we’re rapidly reaching a crisis point. Our government is spending too much, borrowing too much, and growing too much. Debt is stifling our private sector growth, and millions of Americans are desperately looking for work.

So, what was the President’s response? At a time when we need quick, decisive, and meaningful action to stop our looming debt crisis, President Obama gave us what politicians have for years: promises that more federal government "investment" (read: more government spending) is the solution.

He couched his proposals to grow government and increase spending in the language of "national greatness." This seems to be the Obama administration’s version of American exceptionalism – an "exceptionally big government," in which a centralized government declares that we shall be great and innovative and competitive, not by individual initiative, but by government decree. Where once he used words like "hope" and "change," the President may now talk about "innovation" and "competition"; but the audacity of his recycled rhetoric no longer inspires hope.

In the past, he promised us he’d make job creation his number one priority, while also cutting the deficit, eliminating waste, easing foreclosures in the housing markets, and making "tough decisions about opening new offshore areas for oil and gas development." What did we get? A record $1.5 trillion deficit, an 84% increase in federal spending, a trillion dollar stimulus that stimulated nothing but more Tea Party activism, 9+% unemployment (or 17% percent if you include those who have stopped looking for work or settled for part time jobs), 2.9 million home foreclosures last year, and a moratorium on offshore drilling that has led to more unemployment and $100 dollar a barrel oil.

The President glossed over the most important issue he needed to address last night: spending. He touched on deficit reduction, but his proposals amount to merely a quarter of the cuts in discretionary spending proposed by his own Deficit Reduction Commission, not to mention the $2.5 trillion in cuts over ten years suggested by the Republican Study Committee. And while we appreciate hearing the same President who gave us the trillion dollar Stimulus Package boondoggle finally concede that we need to cut earmarks, keep in mind that earmarks are a $16 billion drop in the $1.5 trillion ocean that is the federal deficit. Budget cuts won’t be popular, but they are vitally necessary or we will soon be a bankrupt country. It’s the responsibility of a leader to make sure the American people fully understand this.

As it is, the American people should fully understand that when the President talks about increased "investments" he’s talking about increased government spending. Cut away the rhetoric and you’ll also see that the White House’s real message on economic reform wasn’t one of substantial spending cuts, but of tax increases. When the President talks about simplifying the tax code, he’s made it clear that he’s not looking to cut your taxes; he’s looking for additional tax revenue from you. The tax "simplification" suggested by the President’s Deficit Reduction Commission would end up raising taxes by $1 trillion over the next decade. So, instead of bringing spending down in line with revenue, the President wants to raise our taxes to pay for his massive spending increases. It’s tax and spend in reverse: spend first, tax later.

And the Obama administration has a lot of half-baked ideas on where to spend our hard-earned money in pursuit of "national greatness." These "investments," as the President calls them, include everything from solar shingles to high speed trains. As we struggle to service our unsustainable debt, the only thing these "investments" will get us is a bullet train to bankruptcy.

With credit ratings agency Moody’s warning us that the federal government must reverse the rapid growth of national debt or face losing our triple-A rating, keep in mind that a nation doesn’t look so "great" when its credit rating is in tatters.

Of course, it’s nice to give a speech calling for "investment" and "competition" in order to reach greatness. It’s quite another thing to advocate and implement policies that truly encourage such things. Growing the federal government is not the answer.

Take education for example. It’s easy to declare the need for better education, but will throwing even more money at the issue really help? As the Cato Institute’s Michael Tanner notes, "the federal government has increased education spending by 188 percent in real terms since 1970 without seeing any substantial improvement in test scores." If you want "innovation" and "competition," then support school choice initiatives and less federal control over our state and local districts.

When it comes to energy issues, we heard more vague promises last night as the President’s rhetoric suggested an all-of-the-above solution to meeting our country’s energy needs. But again, his actions point in a different direction. He offers a vision of a future powered by what he refers to as "clean energy," but how we will get there from here remains a mystery. In the meantime, he continues to stymie the responsible development of our own abundant conventional energy resources – the stuff we actually use right now to fuel our economy. His continued hostility towards domestic drilling means hundreds of thousands of well-paying jobs will not be created and millions of Americans will end up paying more at the pump. It also means we’ll continue to transfer hundreds of billions of U.S. dollars to foreign regimes that don’t have America’s interests at heart.

On the crucial issue of entitlement reform, the President offered nothing. This is shocking, because as he himself explained back in April 2009, "if we want to get serious about fiscal discipline…we will have to get serious about entitlement reform." Even though the Medicare Trust Fund will run out of funds a mere six years from now, and the Social Security Trust Fund is filled mainly with IOUs, the President opted to kick the can down the road yet again. And once again, he was disingenuous when he suggested that meaningful reform would automatically expose people’s Social Security savings to a possible stock market crash. As Rep. Paul Ryan showed in his proposed Roadmap, and others have explained, it’s possible to come up with meaningful reform proposals that tackle projected shortfalls and offer workers more options to invest our own savings while still guaranteeing invested funds so they won’t fall victim to sudden swings in the stock market.

And what about that crucial issue confronting so many Americans who are struggling today – the lack of jobs? The President came to office promising that his massive, multi-trillion dollar spending programs would keep unemployment below 8%; but the lack of meaningful, pro-free market reforms in yesterday’s speech means his legacy will almost certainly be four years of above 8% unemployment, regardless of how much he increases federal spending (or perhaps I should say because of how much he’s increased it).

Perhaps the most nonsensical bit of double-speak we heard last night was when the President said that hitting job-creators with a tax increase isn’t "punishing their success. It’s about promoting America’s success." But government taking more money from the small business entrepreneurs who create up to 70% of all jobs in this country is not "promoting America’s success." It’s a disincentive that will result in less job creation. It is, in fact, punishing the success of the very people who created the innovation that the President has supposedly been praising.

Despite the flowery rhetoric, the President doesn’t seem to understand that individuals make America great, not the federal government. American greatness lies in the courage and hard work of individual innovators and entrepreneurs. America is an exceptional nation in part because we have historically been a country that rewards and affirms individual initiative and offers people the freedom to invest and create as they see fit – not as a government bureaucrat does. Yes, government can play an appropriate role in our free market by ensuring a level playing field to encourage honest competition without picking winners and losers. But by and large, government should get out of the way. Unfortunately, under President Obama’s leadership, government growth is in our way, and his "big government greatness" will not help matters.

Consider what his "big government greatness" really amounts to. It’s basically a corporatist agenda – it’s the collaboration between big government and the big businesses that have powerful friends in D.C. and can afford to hire big lobbyists. This collaboration works in a manner that distorts and corrupts true free market capitalism. This isn’t just old-fashioned big government liberalism; this is crony capitalism on steroids. In the interests of big business, we’re "investing" in technologies and industries that venture capitalists tell us are non-starters, but which will provide lucrative returns for some corporate interests who have major investments in these areas. In the interests of big government, we’re not reducing the size of our bloated government or cutting spending, we’re told the President will freeze it – at unsustainable, historic levels! In practice, this means that public sector employees (big government’s staunchest defenders) may not lose jobs, but millions of Americans in the private sector face lay offs because the ever-expanding government has squeezed out and crippled our economy under the weight of unsustainable debt.

Ronald Reagan said, "You can’t be for big government, big taxes, and big bureaucracy and still be for the little guy." President Obama’s proposals last night stick the little guy with the bill, while big government and its big corporate partners prosper. The plain truth is our country simply cannot afford Barack Obama’s dream of an "exceptionally big government" that may help the big guys, but sticks it to the rest of us.

This is a powerful policy statement. Sarah Palin gets it. Barack Obama clearly doesn't.

Sarah Palin has a true vision for the nation. It's what real leadership looks like.
Posted by Gary at 1:16 PM