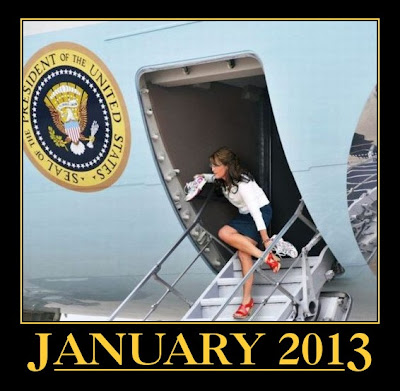 The photo above depicts our brand new President, Sarah Palin, departing Air Force One. She's removing her stylish heels and putting on her running shoes for the marathon she's about to run, as she Revives, Renews, and Restores America to greatness.

I think most of us have a good idea the sort of policies Sarah would implement as President, least in a broad sense. We know creating jobs and energy independence would take priority, as would getting the federal government out of our lives, and returning power to the states, where it belongs. Sarah will spend a lot of time mending fences, restoring relationships with allies around the world, who have been angered, and disrespected, by the Obama regime.

As we get closer to 2012 and election season, we'll be discussing more what Sarah will likely do once in office. What we'd like for her to do, as well. For now though, I though it would be fun to put together a Dream Team. Who would be the very best of people to join Sarah as she restores America, after four years of the Obamanation.

This list is by no means a complete one of all of the agencies and positions she'll need to fill. Just some key ones. We encourage readers to offer up their opinions, suggestions, and so on. Help us pick out our Dream Team for Sarah!

Looking forward to a vigorous debate!

To me, this is a no brainer. One of the big things a President must have is successful Executive experience. It's why we generally elect Governors to the presidency. Since the Vice President must be able to take over for the President should something happen, why shouldn't he or she be a successful Chief Executive as well?

There's more to it than that though. Rick Perry and Sarah Palin share the same ideals of Liberty and Freedom. Both are federalists, strong believers in states rights over the federal government. Rick Perry, like Sarah, is a superstar when it comes to solid performance as a Chief Executive. Texas has been the only state consistently creating jobs during the crisis we are suffering under. Perry, like Sarah, knows what it takes to make a state, and a nation, business friendly.

Texas also instituted massive law suit reforms that have not only made us more business friendly, but have helped the health care industry as well. Doctors are coming to Texas from other states and health care in Texas is some of the very best in the nation. Perry, unlike a certain Governor who, like Obama, has a socialist health care program named after him, understands free market principles, not government take over, is the way to reform.

It also doesn't hurt that Sarah and Rick are friends. Many times a presidential ticket is a "marriage of convenience" some sort of contrived nonsense to "unite the party." Oddly enough, this sort of thing is unique to the Republican Party, ESPECIALLY when a strong Conservative is at the top of the ticket.

The GOP elites threaten to take their toys and go home if they don't get their way. I remember the establishment forcing George H.W. Bush on Ronald Reagan to "unite the party" and STILL running John Anderson as a third party guy anyway! RINOs are never satisfied unless it's an all RINO ticket. Then many still vote for the other side.

Look what happened with the Reagan presidency. Reagan and Bush were never in love with one another in the first place, and when Bush was elected after Reagan, he killed all of the momentum of the Reagan Revolution. Instead we got a "thousand points of light" and "compassionate conservatism" which is nothing more than "democrat light."

With Rick Perry, once Sarah finishes her eight years, and he is elected to the presidency, we won't have to worry about the Palin Revolution. It will be in good hands.

Also, I have no doubt that Sarah could give Rick a portfolio of his own, and be confident he would carry out her plans to the letter, and help her accomplish what must be done. Like Sarah, he's a true leader.

This would be the "make every liberal in America's head explode" choice. Though West has no Executive experience as a Governor, you don't get to his rank as a leader without exhibiting the right stuff. You also learn the Executive skills needed to get the job done.

I like Allen West because he is unabashedly and unapologetically Conservative. He's also a fighter. Folks that follow him on Facebook know he has jumped into Congress with both feet, and is working very hard to make things happen. To shake things up. One of the hardest working guys out there. Many people have him as their first choice to be Sarah's Veep, and Sarah endorsed him in 2010. I only place him second, because of Rick Perry's record and experience.

This man was born to be Secretary of the State. No one understands what is going on around the world better, and no one would powerfully advocate for America stronger. This is the no brainer pick.

I know, I can see the emails coming from my front porch! This is a solid choice though. Let me explain:

For all of the things John has done to anger Conservatives, he's also been one the ones who has always looked after the military and it's best interests. He was also one of the only ones who was right on Iraq, and the surge. In fact he was his normal "cordial" self as he screamed from the roof tops that we needed change in our strategery. He was right. This would be a fitting and wonderful way to top of f John McCain's career in public service.I have no doubt he would serve Sarah and the nation incredibly well.

It would also open up a Senate seat in Conservative Arizona.

You wouldn't see cases against domestic terror groups, like the New Black Panthers, being thrown out and covered up. Rudy was tough on crime as Mayor of New York. He took over a city that was all but in ruins. Totally out of control. He cleaned it up. He has an understanding of the Rule of Law. He wouldn't be intimidated by anything or anybody.

Other choices: Ken Cuccinelli of Virginia, Pam Bondi of Florida

Both Cuccinelli and Bondi have been at the forefront of the ObamaCare fight in the courts. They are young, strong, and full of fight.


* Secretary of the Treasury: Steve Forbes

This guy is very astute. Knows how economies work, and how they don't. Is a solid businessman, and one our best economists. Also is for a flat tax. A very simple, everyone pays the same, uncomplicated tax code. Something that would make businesses thrive, which in turn would make everyone, and everything, thrive, as well.

Both of these men are as qualified as Forbes.

Art Laffer was an economic adviser to Reagan, and was key in creating the longest period of economic growth in our nation's history.

Thomas Sowell is one of America's greatest thinkers alive today. You could fill books [and he has] just on his knowledge of economics alone! Dr Sowell must have some sort of role in a Palin administration.

Also, while many would love to abolish the Fed, a sound plan .... if there has to be a Fed .... any three of these gentlemen could be trusted to run it properly.

In all seriousness though. Joe is one tough guy, and understands what must be done. Homeland Security is first and foremost about defending the homeland. Our biggest threat is unchecked illegal immigration. We are finding radical Islamists and their paraphernalia on our southern borders. No doubt that would be less of an issue with Sheriff Joe on duty

Hey, Sarah won't have the time to do the job herself, even though this is one of her areas of great expertise.

Pickens is a oil billionaire, but he is also pretty forward looking. He was one of the first to call for our fleet to start the conversion to clean and green natural gas, and for wind turbines to replace natural gas fired electrical generation plants, where possible. He was also one of the first to see the fallacy in this plan too. I agree with converting our fleet to compressed natural gas [CNG] but as Pickens found out, windmill farms only work with government subsides, and we need fewer of those, not more.

Pickens is a sharp guy and a solid thinker who believes in looking for alternative ways to fuel the engine of democracy. But also believes these alternatives must be able to succeed without massive government [tax payer] dollars.

No doubt he would be very much on board with Sarah's "all of the above" stance as a way of energy independence. Though we must look to alternatives, something private companies can do better than government, we must also look to continued oil and natural gas exploration, as well as coal and most certainly expansion of nuclear energy.

France gets over 70 percent of it's electricity from nuclear powered plants. FRANCE. Let that roll around in your head for awhile.

There are more Cabinet positions, some we'd love to see eliminated.

Also which ones need to go.

Great leaders will choose people that will not only give good advice, but also challenge the Executive from time to time, making them justify what they want to do. Yes men need not apply.

There are any number of people who will be great picks. As me mentioned earlier, Thomas Sowell simply must play a part in a Palin administration. He would make an incredible economic adviser. Liz Cheney is someone else who would be a good choice. She would be a great foreign policy adviser, doing the job Condi Rice did for Bush, before he appointed her Secretary of State. Liz is sharp and very well suited for this sort of position. She's had several important positions at State, and understands geopolitical affairs well.

Sarah will need a Press Secretary too. We would love to see Tammy Bruce up there every day giving the corrupt media hell! Megyn Kelly would be a fun choice as well.

Anyhow, let me hear from you guys. Who do you think Sarah should choose? Make your case on why so-and-so would be perfect for the job.
Posted by Gary at 3:52 PM