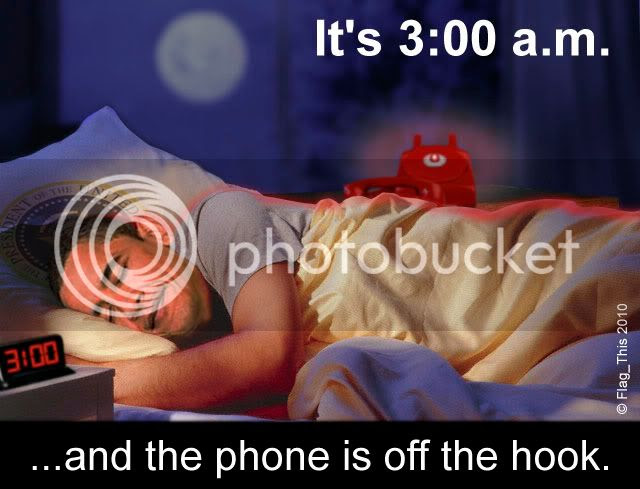 Sarah Palin sat down Friday night with David Brody from CBN News, after she gave her keynote address in Santa Barbara honoring Ronald Reagan. The interview will air Monday on the 700 Club. As they say, check your local listings for air times.

There is a transcript of the interview available, and while Sarah Speaks to a lot of issues, these are her first comments on the situation in Egypt and the Middle East:

In an exclusive interview with The Brody File, Sarah Palin criticized President Obama for his handling of the situation in Egypt saying that this was his, "3am White House phone call" and, "that call went right to the answering machine." Her answers about Egypt are the first time she’s talked publicly about the situation.

On the situation in Egypt:

Sarah Palin: "Remember, President Reagan lived that mantra trust but verify. We want to be able to trust those who are screaming for democracy there in Egypt, that it is a true sincere desire for freedoms and the challenge that we have though, is how do we verify what it is that we are being told, what it is that the American public are being fed via media, via the protestors, via the government there in Egypt in order for us to really have some sound information to make wise decisions on what our position is. Trust but verify, and try to understand is what I would hope our leaders are engaged in right now.


Who’s going to fill the void? Mubarak, he’s gone, one way or the other you know, he is not going to be the leader of Egypt, that that’s a given, so now the information needs to be gathered and understood as to who it will be that fills now the void in the government. Is it going to be the Muslim Brotherhood? We should not stand for that, or with that or by that. Any radical Islamists, no that is not who we should be supporting and standing by, so we need to find out who was behind all of the turmoil and the revolt and the protests so that good decisions can be made in terms of who we will stand by and support."

On President Obama’s handling of the crisis in Egypt:

Sarah Palin: "It’s a difficult situation, this is that 3am White House phone call and it seems for many of us trying to get that information from our leader in the White House it it seems that that call went right to the answering machine. And nobody yet has, no body yet has explained to the American public what they know, and surely they know more than the rest of us know who it is who will be taking the place of Mubarak and I'm not real enthused about what it is that that’s being done on a national level and from DC in regards to understanding all the situation there in Egypt.


And in these areas that are so volatile right now because obviously it’s not just Egypt but the other countries too where we are seeing uprisings, we know that now more than ever, we need strength and sound mind there in the White House. We need to know what it is that America stands for so we know who it is that America will stand with. And we do not have all that information yet."

This is a prudent stance. Few so-called presidential contenders have spoken out on this crisis, and it's refreshing to see a healthy dose of skepticism from Sarah, plus an admittance that frankly, we need to know more information, before making an intelligent decision. here.

Older readers will remember the mess Jimmy Carter got us in by not backing the Shah of Iran. Carter sat by while radicals overthrew the government, a government that was friendly to America, and replaced it with a thugocracy hell-bent on destroying Israel and America. Iran is now the leading sponsor of terror in the world, and on Obama's watch, close to becoming a nuclear state.

We are seeing a replay of the carter years, but on steroids!

Egypt's dictator, Mubarak, is not exactly a nice guy. But he's been an ally, and pretty much the only thing standing between Israel, and radical Islam, who wants to destroy her. So far al Qaeda has been very limited in what it can do, many times settling for suicide missions. If Egypt falls into the hands of the Muslim Brotherhood, al Qaeda will have a modern, well equipped, well trained army to do it's bidding. That would be a world-wide disaster.

Mubarak is indeed gone. His days in office are numbered. It is incumbent on the United States to have a solid grasp of the situation, and make sure that, instead of a mob scene, we have a peaceful and orderly transition of power. It's also incumbent on the U.S. that we not allow the Muslim Brotherhood to come to power.

It's most disturbing though, that Obama jumped into this mess with both feet, supporting the bad guys, while claiming Mubarak should "listen to the will of the people." [something Obama himself refuses to do]

Obama completely ignored the Freedom seeking Iranians who were being slaughtered in the streets when they attempted to overthrow their brutal dictatorship. In fact, when Obama was done with his golf games and Vegas style White House parties, he sided with the brutal Islamic dictatorship, over the will of the Iranian people.

Radical Islam has a long history of teaming up with Socialists and Communists. As much as it is a religion, it is also a political party, and philosophy.

Sarah is spot on and straight forward in her interview here. She rightly quotes Reagan's "trust but verify" strategy. A strategy he used to destroy the Soviet Union. She is also correct when she says we need a leader with a steel spine.

This is not the only thing Sarah and Brody talked about though. This was a long interview.

Does she want to make the mainstream media irrelevant?

If she runs for President, what might she do differently? [Hint: there a bit more Reagan talk here]

On the attacks in the media

On her devotional life

On her decision not to attend CPAC this year

You can read the entire transcipt here.

There will be video available after 9 p.m. [Eastern] Sunday night.

Print and Audio Courtesy: "In an exclusive interview for The Brody File Show on CBN News"
Posted by Gary at 9:04 PM