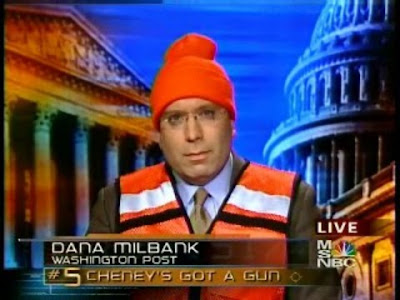 This just keeps getting better! Earlier Jammie Wearin' Fool reported that Dana Milbank's own paper, the Washington Post, sold him down the river 9 hours into his little Palin "boycott" by recycling the story discredited "journalist" Andy Barr was pushing, and MSNBC ran their daily two minutes of Palin hate, right on schedule.

That was funny, but this is hilarious. It seems Milbank can't even control his own urges. He writes this:

I survived Day One of my February Sarah Palin moratorium, defeating the evil plans of ABC News's Rick Klein. Only 27 days to go...

Could this guy, Milbank, BE more of a cartoon character?

Folks this is what passes for an "award winning journalist" at both the Washington Post AND ABC News. Both outlets wonder why fewer and fewer people trust them for news.

I wonder if these  wizbang little creatures know just how truly idiotic they are?