Temple of Mutt: Looking at Sarah Palin with “New Eyes” 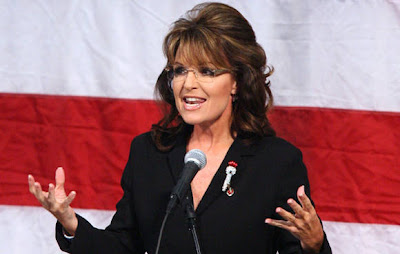 Here's an interesting take on Sarah Palin and the new movie The Undefeated we reported about late Tuesday. The author is a self-described "Palin Democrat" and a PUMA. [Party Unity Me Ass] PUMAs are democrats who left the party after seeing the underhanded ways the machine installed Barack Obama as the nominee. Many are passionate Palin supporters.

Dear Readers: I have been dialoging with the SAN-DIEGO LOCAL ORDER OF BLOGGERS (SLOBs) for some time on the Presidential primary. Initially, I was the only Palin supporter (a classic “Palin Democrat“). However, as I have been sharing my positive thoughts on Sarah Palin, and the field of potential candidates has substantially changed, some of my blogging comrades have warmed to her.

In light of the new move, “The Undefeated,” I am asking my friends (and all Americans, for that matter) to look at Palin with “new eyes”.

Divided into three acts, the film makes the case that despite the now cliched label, Palin was indeed a maverick who confronted the powerful forces lined up against her to achieve wide-ranging success in a short period of time. The second part of the film’s message is just as clear, if more subjective: that Sarah Palin is the only conservative leader who can both build on the legacy of the Reagan Revolution and bring the ideals of the tea party movement to the Oval Office.

The initial showings will be in Iowa, South Carolina and Nevada. My Romanian gypsy fortune-telling instincts tell me that a Presidential run is in Palin’s future.

The expression "new eyes" comes from one of by favorite Yul Brynner Films: Kings of the Sun.In this film, Yul (chief of a North American Indian tribe named Black Eagle) stumbles across a new city being build by refugee Mayans. The Mayans decide the best way to open the new city is a classic, heart-ripping sacrifice of one of the locals — in this case, Black Eagle. After Black Eagle informs the Mayans he isn’t going to be slaughtered like an animal for their gods, the Mayan king decides to try things in the local fashion. At that point, Black Eagle, impressed with the potential of the new city, decides he wants to look at the city with “new eyes”.

In light of the new Tea Party attitude, in which we would like to jettison the “ruling class” dictates with “country class” common sense, I would ask for everyone to enter into the primary season with an open mind and a willingness to go beyond the usual news sources for information on all the candidates. PLEASE LOOK AT SARAH PALIN WITH “NEW EYES”.

One other note, related to this: It has become known to me that Mitt Romney’s staff and Michelle Bachmann’s people are seen together often and work quite closely together. I need for all of my friends to be very cautious about Bachmann

I recall that Mitt was tag-teamed out of the 2008 primary by McCain and Huckabee. I sense a deal is made between the pair in the event Palin is running.

This will not end well.

I would like the potential Bachmann-supporters out there to note a few things:

* Bachmann has not formally announced; if you give money to her PAC, please be advised it could end up in someone else’s campaign — including Romney’s. I worry that her PAC is there to take money from the Tea Party people to give to the establishment.

* She seems quite willing to massage her position on tax cuts and ear marks.

* She did NOT defend the Tea Parties after the vicious smears and “blood” libel after the Tucson shooting tragedy.

I contend that if Sarah Palin can woo the independent conservatives within the Republican party, who are uncertain of her but loathe to vote for a “RINO”, she can win the independents in the 2012 general election and go on to victory. However, I recognize that this first step is important. I think the film idea is innovative and exciting, so unlike some of my fellow SLOBs, I am now jazzed.

If she wins, great. If she loses, honorably, to another who is a straight-shooter with better plans and presence, that is OK with me. However, if the GOP elites try to manipulate the primary and game the process, then they will have to contend with a lot of really pissed-off Palin supporters. That won’t bode well for a successful general election result, as the “Palinistas” are about the most active and engaged citizen activists that I know.