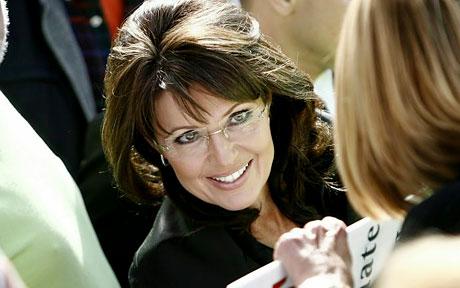 The Poll Insider does some of the best in-depth analysis of polling and polling methods we've ever seen. Most politically savvy observers realize that polling now-a-days is often used to create a narrative, rather than take a snapshot of current feelings.

Polsters create questions to achieve the desired outcome and weight polls in manner to do the same. Many times they over sample democrats and democrat leaning independents to make the Republican in the contest look uncompetitive. Do it enough and perception can become reality if this nonsense isn't pointed out.

Oh, and don't get me started on the whole "adults vs "registered voters" vs "likely voters" game.

We've seen a lot of polling lately that shows Sarah Palin and Mitt Romney are in a tie for first place if the GOP primaries were held today. And, as has been the case since day one, Sarah Palin has the highest approval rating among Republicans and Republican leaning Independents.

The latest poll to get the "Insider" treatment is one from the Daily Kos' official polster, Public Policy Polling [PPP] taken in the battleground state of Ohio: [some emphasis mine]

Public Policy Polling’s magic is back to work again. A new Ohio poll, featuring an important swing state that Obama narrowly won in 2008, is up this week. Like most other PPP polls, Democrats are the overwhelming respondents in this poll. How bad? Lets take a look: The PPP poll had a respondent makeup of 45% Democrat, 35% Republican, 20 Independent, giving the Democrats a +10 Net Advantage over Republicans. In 2010, the Ohio turnout was 36% Republican, 36% Democrat, 28% Independent. So, no difference. The 45% Democrat sample even overdoes Democrat heavy 2008 by 6 points, where still only 39% of the Ohio electorate were Democrats. Its a near impossibility that 45% of the 2010 voting electorate will be Democrats in Ohio if it wasn’t even that close in 2009, as this poll shows.

What does PPP President Dean Debnam say about these results? "These Ohio numbers epitomize Barack Obama’s status right now- he’s not terribly popular but the Republican field is even more unpopular and because of that he’d be in a solid shape for reelection if we had to vote today. If a GOP candidate really captures the attention of the voters Obama will be in trouble but that is far from inevitable." Ok, sure, if 45% of the electorate is Democrats….

PPP Reports a 10 Point Victory for Obama against Palin if the election were held today. Gosh, I wonder if a 10 point victory has anything to do with a 10 point artificial inflation of Democrats? Doing the work no media analysts will do, we re-run the numbers here and let you decide what is most accurate.

Poll Insider Base Analysis: Obama 46%, Palin 43.5% – Here we see a statistical dead heat. We rework the the PPP numbers showing the makeup of the 2010 electorate of 36% Democrats, 36% Republicans, and 28% Independents. It is safe to assume that the 2012 electorate will be much closer to the 2010 one than to the 2008 one now that Obama has a (fairly unpopular) record in the state. Sarah Palin actually tops Obama slightly in Independents by 1% and even gets 1% more Democrats than Obama gets Republicans.

Poll Insider Analysis Level 2: Palin 48.5%, Obama 48% – This level I consider the best indicator on a statistical level as it includes all GOP and Dems and leaves out undecided Independents. Still a close race, but now Palin moves ahead. The reason Palin still trails in the first poll is that 14% of Republicans are undecided compared to just 5% of Democrats, these are allotted in similar fashion as the rest of the voting bases for each candidate. Challnger party high undecided rate is very common when testing an incumbent vs. a multitude of potential challengers, and the challengers usually trail in the undecided column. Why? In this case Republican voters often have a candidate in their minds to go up against the incumbent. Oftentimes they answer undecided when their candidate is not the one mentioned because at the time they don’t want to imagine that person as the candidate, even though they are likely to vote for them should they become the nominee. The incumbent’s party usually has low undecideds as they know who the candidate will be and there is no other horse in the race.

Poll Insider Analysis Level 3: Palin 51%, Obama 49%. Of the remaining 15% Undecided Independents, we allotted 9% to Palin and 6% to Obama, giving the break 3-2 to the challenger. We arrive at this rate knowing that Undecided Independents usually vote for the incumbents by similar (or greater) margins; Ohio Independents favored Republican Senate candidate Portman by almost 40% points over his Democrat challenger and favored now Governor Kasich by 16% over the Democrat incumbent.

4 scenarios, 3 of which show a reasonably close race, the other is PPP. I analyze, you decide. This is a good sign for Palin as she will have a much better opportunity to change minds in her favor than Obama will. If Palin’s numbers are this strong with the media coverage she has gotten, Ohio might not even be a toss-up a year from now.

Other tidbits from the poll:

Favorability among Republicans: Hey, remember all those media stories about how Palin is falling from GOP stardom? Well, turns out she remain the top Republican of the 3 main challengers. While Gingrich has a pitiful +9 standing among Republicans and Romney is at a pretty decent +30, Palin leads the pack among the Republican field at +36% favorability.

The Insider also reports that, to absolutely no one's surprise, Sarah Palin wins Texas handily, even with Huckabee still included in the poll. Speaking from personal experience Texas is Palin Country.

Tee Insider is a great website for folks who want to really understand polling beyond the headlines.
Posted by Gary at 2:06 PM