Was The Attempt To Blame Palin For Tuscon Shootings A "Fast And Furious" Cover up?

After seeing the report by John Hayward back in June, I thought someone would look at things and ask questions, but alas, no one has.

For those not familiar with the "Gun Walker" AKA "Fast and Furious" scandal, let me give you the Readers Digest version:

In 2009, not long after President Barack Obama took office, his people started a propaganda campaign that pounded home the idea guns manufactured in the United States were ending up in the hands of Mexican drug cartels, and other assorted thugs. The claims were, most gun violence in Mexico came from weapons traced back to the United States.

In fact, Mexico's President Felipe Calderón used the same talking points the White House was using, when he spoke before a joint session of Congress, and in interviews. This was a highly choreographed affair, and the world's media did their part by breathlessly reporting it all with headlines like: US Guns fuel violence in Mexico. All cited a Congressional report, created by a then democrat controlled House and Senate.

In fact the BBC is still reporting:


A US Congressional report suggests some 70% of firearms recovered from Mexican crime scenes in 2009 and 2010 and submitted for tracing came from the US.

Here's the thing, we now know all of these guns in question came from the United States government. That's right, The Department of Alcohol, Tobacco, and Firearms had been putting these weapons directly in the hands of Mexico's drug cartels and violent gangs.

Why would they do this? The claim is they were running some sort of sting. The truth is more disturbing. It seems The Obama regime cooked this all up as a way to finally disarm the American people, a time honored goal of the democrat party for the better part of 100 years.

The idea was to make it seem guns simply couldn't be effectively regulated, and since there was no way to make sure guns couldn't fall into the hands of bad people, the only cure was to take everyone's guns away. Anyone who's paid attention has seen all of the renewed talk of gun regulations by democrats, even though the Supreme Court recently affirmed the American people's God given right to own and maintain fire arms, a right guaranteed by the Second Amendment.

We now know this treasonous scheme goes all of the way to the Oval Office. Attorney General Eric Holder is in on the deal, as are ATF supervisors and even members of the FBI. Congressman Darrell Issa, of California is currently holding hearings into the matter. Suffice it to say, this set up makes Iran-Contra look like a Sunday afternoon at the local gun show. It's big and should not only lead to resignations and prison time for all involved, if the link to Obama himself can be well established, impeachment.

That brings us to the Tuscon shootings. As John Hayward reported:

After Gun Walker automatic rifles were found at the scene of Border Patrol Agent Brian Terry’s murder, an agent testified that "there was a sense like every other time, even with [Representative Gabrielle] Giffords’ shooting, there was a state of panic, like, oh, God, let’s hope this is not a weapon from that case." There was more panic when Immigration and Customs Enforcement agent Jaime Zapata was shot while sitting in his car in Mexico.

To the relief of the ATF, it does not appear that Gun Walker weapons were used in either the Giffords or Zapata shootings, but that doesn’t make Agent Terry any less dead. The House Oversight Committee concluded his death was "likely a preventable tragedy," and the Gun Walker project "contributed to the increasing violence and deaths in Mexico"… a result met with "giddy optimism by ATF supervisors hoping that guns recovered at crime scenes in Mexico would provide the nexus to straw purchasers in Phoenix." Hopefully the Mexican government will be relieved to know its citizens died for a good cause.

As our readers know, Jarred Lee Laughner, a left wing loon who had been stalking Congresswoman Giffords since 2007, went to an event she was holding in Tuscon and not only shot Giffords, but injured 12 more people, and killed 6, including 9-year-old Christina-Taylor Green.

What has always bothered me is how quickly the left started blaming Sarah Palin for all of this. Local EMS were still at the scene and authorities on the ground were still trying to sort things out, when Markos Moulitsas, who runs the Daily Kos was tweeting it was Sarah Palin's fault. Within the next few hours the entire left had seized on this.

Sheriff Clarence Dupnik, whose men recently killed a war hero by mistake, was on the air, and full on crazy, blaming Sarah Palin, and Conservatives, en masse. It wasn't long before the entire Tea Party, along with Sarah, were accused of mass murder. The blood libel carried on for weeks.

The left focused on "crosshairs" on a map of districts targeted by SarahPAC as areas the Republican Party could win. These were districts the McCain/Palin campaign had won handily in 2008. Congresswoman Giffords district was one of them.

We've talked about all of this before, and pointed out that Moulitsas' own website had put a bulls-eye on Giffords, a "blue dog democrat" also targeting her for defeat, and calling her a sell out. 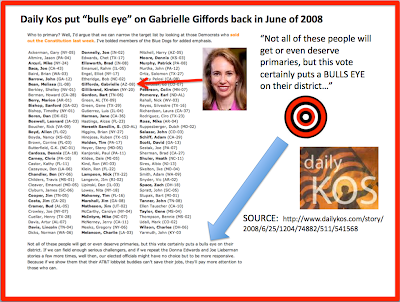 HillBuzz reported that just days before the attack, one of the Kos bloggers, who lives Tucson, wrote that Giffords was "dead" because she didn't vote to make Nancy Pelosi House minority leader.

Back to the effort to indict Sarah Palin and the entire Tea Party for mass murder. We know the White House coordinates everything with the corrupt media. The folks at MSNBC's Morning Joe have bragged about getting texts from the White House while they are on the air. Others have admitted the collusion as well.

Anyone with half a brain, seeing that everyone was using the same talking points, knows there was a coordinated effort to blood libel Sarah and the millions of Tea Party members. We all learned how the media works when the infamous JounoList scandal broke.

At the time, most of us just though this was the left being their normal, evil self. Now, knowing more facts, one has to ask, was all of this done to cover up the Gun Walker affair? To hopefully avert everyone's attention IF the gun Laughner used was one of the ones the Obama regime had put out there? Was all of it a "Fast and Furious" coverup?

Think about it, those involved were scared the gun was one of theirs, and at the time, didn't know any more about all of this than the rest of us did. Even once Laughner was caught, there was still a serious question of where his gun came from. How hard would have been for the people involved to contacted Eric Holder, who is up to his eyeballs in this, and in turn Holder contact Obama, and then do what they do best by never letting a good a good crisis go to waste?

Look, I have no proof here, this is all speculation on my part. But the effort to blame Sarah Palin immediately, and then eventually the entire Tea Party, was just too well coordinated. It could be the left was just doing what it always does, but these new facts raise a lot of questions.

Hopefully someone with a larger megaphone than I have will ask the same questions. Even if I turn out to be totally wrong, I sure would love to find out the truth. Wouldn't you?