I understand Sarah Palin spoke here last year. I admire her. She’s a great lady, mother and wife, and that’s more important than the [bull****] the media spreads about her.

Legendary football coach Mike Ditka knows a winner when he sees one and in Sarah Palin, he sees a true winner. As AWR Hawkins over at Andrew Breitbart's Big Journalism points out, if you rely on America's corrupt, lamestream media, you'd never know this.

"I understand Sarah Palin spoke here last year. I admire her. She’s a great lady, mother and wife, and that’s more important than the [bull****] the media spreads about her."

Ditka has offered up a strong defense of Palin before. For instance, in 2010, during an interview on Fox and Friends, he said "Sarah Palin is one of the greatest people I’ve ever met."

When he stumped for Palin/McCain in 2008, Ditka said Palin "epitomizes all the good qualities of this country." He also called on audience members to put party affiliation and anything else that divided them aside long enough "put Country First" for a change. (Ditka lead by example by unashamedly admitting he was a Republican and a conservative, and most importantly, he said, "I am an American.")

Of course, I don’t recall hearing Chris Matthews, Matt Lauer, or anyone in the MSM mention Ditka’s kind words for the Governor in 2010 (nor do I remember them making fun of him for being a Republican). And since that was back in the days when Keith Olbermann still had a show, you’d at least think Ditka would have made the "Worst Person in the World" list.

Come to think of it, I don’t recall hearing them talk about Ditka’s kind words for Palin on the campaign trail in 2008 either. (I’ve got a feeling Matthews, Lauer, and Olbermann would rather pick fights with people who don’t fight back, and they all know Ditka isn’t the type to just shut up and take it. That’s why they fear him and that’s why we love him.)

That’s also why we love Palin.

For the record, I won’t be expecting any MSM outlets to cover Ditka’s most recent praise of Palin at all. They’ll be too busy carrying water for Obama’s sinking ship or talking about how great it is to see Eric Holder sue another state for passing legislation aimed at protecting their borders.

Coach Ditka isn't the only coaching icon to consistently heap praise on Sarah Palin. After the Governor's stellar performance at the 16th Annual CLSA Investor’s Forum in Hong Kong, in September on 2009, famed Notre Dame coach Lou Holtz has this to say:

Sarah Palin excites me. She stands for something. 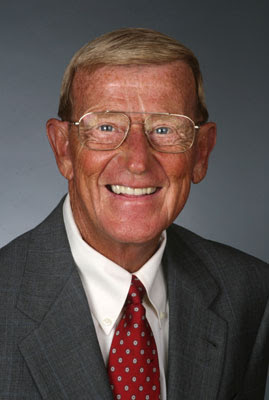 By the way, the Wall Street Journal said of Governor Palin's speech:

The former vice presidential candidate understands Beijing better than the Obama Administration does.

Read more about all of that here.

Let's see, two of the greatest men to ever coach the game, men whose careers depended on them being able to spot great talent, find Sarah Palin to have it. One would think that would be at least a bit newsworthy, wouldn't one?