No Wonder Chris Christie Didn't Join The Fight Against Obamacare! 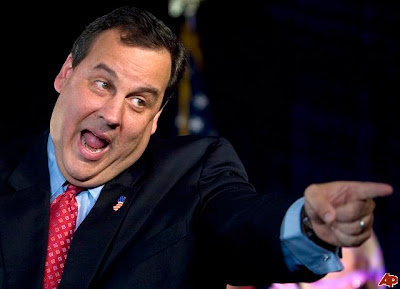 Looks like another myth about Chris Christie [that he's a "fiscal conservative"] has been busted.

Remember when the You Tube celebrity governor made a point of saying he wouldn't join in the multi-state lawsuit against ObamaCare? At the time he said it was because he was so busy in New Jersey and he felt he didn't have the time. Making You Tube videos is hard, evidently.

Conservatives were rather perplexed at the time. It wouldn't have cost NJ any money to join in the lawsuit and having a state like NJ in the mix would have only strengthened the position of those states suing to have ObamaCare invalidated. Say what you will, but Christies celebrity status, as dubious as it is, would have been seen as a plus for those fighting to stop the Obamacare fiasco.

Dan Riehl points out why Christie chose to stay away from the fight of our lifetime. Far from being a fiscally responsible conservative, Christie ... like most progressives ... looks for the American taxpayer to bail him out, rather than work hard to fix the situation, like Wisconsin's Governor Scott Walker has so brilliantly done.

Christie supporters love to point out that Christie "tackled the union problems" concerning pensions and health care. Well, let's see just how Christie did this:

Is This Why Christie Didn't Join ObamaCare Suit?

So, Christie "derides" ObamaCare? I honestly didn't know that. He certainly hasn't made it a key issue, also failing to join the many states that sued over it. On the other hand, his application for $39 million under it was treated "favorably" - and they're already after another $40 million for this year. Hmm, New Jersey is second only to California in terms of the dollars it received from it to prop up its ailing public worker health insurance fund.

Oh, and the program encourages states to continue the program, apparently. Imagine that. Well, that's not quite as bad as Mitch Daniels, who expanded public health care in Indiana, I guess. But it's close. Christie can't afford to do it, ... for now.

Christie’s administration aggressively pursued the funding, a Treasury Department spokesman said, and is seeking payment for another $40 million already this year.

"We had to compete against other employers for the proceeds," spokesman Andrew Pratt said in an e-mail. "Our application … got comparatively favorable treatment because it [was] filed very quickly after the application process began in July."

New Jersey ranked second, behind California, among state governments receiving payouts from the Early Retiree Reinsurance Program, according to a recent report issued by the Department of Health and Human Services.

The program reimburses public- and private-sector employers and labor union benefit funds for some of the cost of providing health insurance to early retirees between ages 55 and 65.

The funding was designed to encourage employers that were providing early retiree insurance to keep doing so because coverage for older people who are not |yet eligible for Medicare can be prohibitively expensive, according to an HHS spokesman, Keith Maley.

So, while Christie talks tough about ObamaCare to his You Tube fan boys, he's actually taking tens of millions of dollars, taxpayer dollars, to shore up his failing state, from the very program he claims to be against. I think the word hypocrite was invented for a guy like Christie!

A lot of people have been fooled by this phony. We haven't. Stacy Drake, while taking Christie's fan boys to task, points to the many ways Christie is no Conservative, fiscal or otherwise. Among some of the things she cites:

* His budget passed only after three conservative Republicans were bullied into voting for it and the savings achieved in the budget were done at the expense of new taxes, new fees, federal Stimulus funds and accounting gimmicks; the 2% property tax cap will actually cause taxes to skyrocket; he has yet to propose the "across the board" tax cuts he promised as a candidate; the budget actually INCREASES state expenditures by 6% and the number of staff in the Governor’s office making $100,000 per year increases by ten;

* His confrontation with the unions is pure Kabuki theater with nothing accomplished but acrimony; he has yet to lay off a single state employee and his proposed 2011 state worker reduction plan is little more than window dressing;

* He has populated his cabinet with notorious liberals while firing the only true conservative – after slandering him;

* He has endorsed notorious RINO candidates in the 2010 mid-term election while avoiding (with one notable exception) contact with conservative candidates;

* He supports a multi-state Cap & Trade scheme known as the Regional Greenhouse Gas Initiative and is so committed to Cap & Trade that he used funds raised from RGGI’s carbon auctions to help balance the budget; he has directed that state funds be appropriated to subsidize "green" technology ventures such as off-shore windmills;

* He has refused to join other state attorneys-general in a joint lawsuit challenging the constitutionality of Obamacare while accepting federal funds for the implementation of a similar program on a statewide level;

* He is on record saying that he does not believe illegal aliens are here illegally; he has indicated that he supports amnesty for illegals; he generally favors strict gun control and he supports construction of the Ground Zero Mosque even as he condemns those who oppose it.

While Stacy points out Christie's support for the Ground Zero Victory Mosque, a poke in the eye to every American effected by the 9/11 attacks, we discovered his Dirty Ties To Hamas-linked Islamic Supremacists, which explains just how much Christie is involved with these terrorists and promoters of Sharia Law in the United States. Christie actually appointed someone who believes Sharia should be the law of the land to the NJ Superior Court!

Though Christie may thrill his fans on You Tube, we feel it's imperative for serious people to take a look at Christie's actual record. Once you turn off the spin, and celebrity hype, you find this so-called "conservative Republican" is really just an old fashioned liberal democrat, who loves big government and wouldn't know real conservatism, fiscal or otherwise, if it walked up and bit him.

One more case of style over substance, something that is epidemic in American politics.

We need leaders, not self-promoting media celebrities who can't deliver anything but hype.
Posted by Gary at 1:14 PM