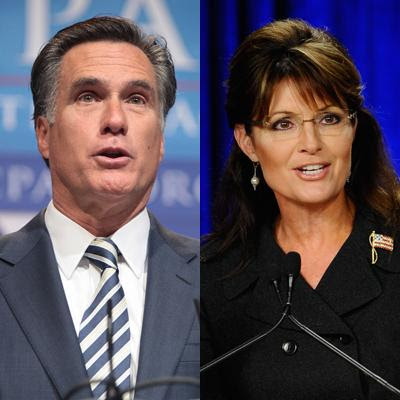 I think we witnessed last week that Sarah Palin can take Mitt Romney anytime she wishes. That being said, the Poll Insider offers up his usual excellent analysis: [emphasis mine]

First, if Sarah Palin does not run, Mitt Romney will be the nominee. I believe she will but, but of course many in the establishment see "no signs" that she is interested in such a race. Polling suggest that, surprisingly, Mitt Romney has the most to gain by Palin sitting out. Conventional wisdom suggests otherwise as Romney and Palin do not share the same power base. But polling tells a different story. A Public Policy Poll released yesterday shows the race tied at 16% for both Palin and Romney. Pawlenty and Cain follow close behind at 13% and 12%. But with a Palin exit, Romney goes from a tie with Palin and a 3% and 4% edge over the next two contenders and jumps to a 7 point lead over his closest 3 challengers (Bachmann, Pawlenty, Gingrich).

The big issue is, Palin voters have no clear second choice and split evenly among the field. Cain, who you might think would benefit most, fails to pick up a single point. Pawlenty also fails to pick up any of her support. Yet Romney, Gingrich, and Bachmann each pick up a tidy 4% a piece. Romney’s 4% helps him distance himself from Pawleny and Cain, while Bachmann and Gingrich’s 4% leaves them at the same 7% deficit they were at with Palin in the race.

A CNN poll done at the same time showed similar results. Romney (19%) and Palin (15%) led the field with Paul back 6 points behinf Romney, and Gingrich and Cain back 8 points. With palin out, Romney’s lead grew 2% against the nearest competitor, Paul, who picked up nothing by a Palin exit.

Cain still trailed by 8 points, and Gingrich slapped back to a 9 point defecit. And since I mentioned Dick Morris, I’ll throw in his numbers. He had Romney at 25%, Palin at 16%, and Gingrich at 11%. Without Palin, Romney grew to 30%, Gingrich to 15%, and everyone else less than 7%. So even here, a 9 Point race with palin in, became a 15-point race with her out.

When Huckabee left the race, Sarah Palin became the logical choice for most of his supporters. But Palin voters do not have a logical second home. There is Bachmann, who is basically a poor-man’s Palin. Cain is a tough one because they like what he says and his passion, but lacks the experience and where was he in 2010? Then there’s Gingrich who has been equally villified as Palin, but more deservedly so. And then there’s Romney, the guy "who can win."

If Palin Runs as expected, it will be a close race to the finish between the two of them. So, why is Palin the only one who can derail Romney? First, see the above portion. When voters do not vote for Palin (so even is she runs but loses steam) her support drifts to Romney more than anybody else. With Palin in the race, voters will be forced to decide whether to coalesce around one conservative candidate and win, or break apart into multiple factions and hand the nomination to Romney.

Sarah Palin voters do not have a clear second candidate, and it is difficult for any of the candidates to sufficiently distinguish themselves from the others in a big enough fashion. For instance, if a Palin voter decides to go for another candidate, there is no real reason to choose a Cain over a Bachmann, Pawlenty, or Gingrich. Does one have significantly more ground support than the other? Can one raise more money than the other? All are clearly playing to the same base, but how can they separate themselves in enough of a fashion to catch up to Romney?

However, Palin has a much easier and, possibly only, road to victory. For starters, Palin is already tied with or within the Margin of Error of Mitt Romney. My guess is that she will probably even surpass him in some polls that take place after her current and well-received Road Trip. So she doesn’t have as much work to do as the other candidates. She is also the natural beneficiary of conservative voters deciding to get behind one candidate.

She is easily the most popular among Very Conservative voters, who are typically the most active at this stage, and Tea Party activists. Because Palin has the largest grassroots capabilities, the best ability to raise funds, and has been the leading vocal opponent to Obama for the past 3 years, she is an easy, natural choice. It is more likely that a Cain supporter would fall towards Palin than Bachmann, and a Bachmann supporter to fall towards palin than Gingrich.

The irony is by running, Palin helps the entire non-Romney field by keeping Romney in the mid-teens in support and within a close distance to all of the candidates. By not running, she actually hurts the other candidates, and Romney benefits.