Regular readers know that I spent a lifetime in sales and management, which gave me quite an insight into successful leadership, and what makes a great leader. Reading Sarah Palin’s notes on the occasion of her endorsement of Carly Fiorina for the United States Senate reminded me of a great leader I had the pleasure to work with, who taught me what it took to be effective.

Roy was an incredible man. He was a real master of strategery and a solid tactician. I never saw someone who could think so fast on his feet, and manage affairs so well. He was great with people, if not a bit gruff at times, deep down, he was a real softy, but only to those who knew him best.

One thing Roy understood is that sometimes, to get the desired result, you had to shake things up. Sometimes that meant taking a decent team member, that just wasn’t getting it done, and wasn’t gonna get it done, and putting in someone that could, and would. Sure, egos would get bruised, but professionals understood, and in the end, everyone was much to the better for it.

Leaders lead, which brings me to Sarah Palin: 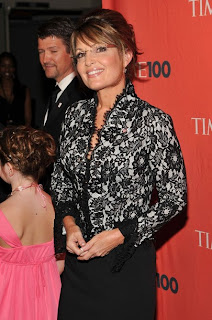 Let’s shake it up in California! (Updated)

I’d like to tell you about a Commonsense Conservative running for office in California this year. She grew up in a modest home with a school teacher dad, worked her way through several colleges, and then entered an arena where few women had tread. Through a combination of hard work, perseverance, and common sense, she proved the naysayers wrong to reach the top of her field, where she led with distinction – facing hard truths, making tough decisions, and showing real leadership through a rocky transition period. Where others had failed, her company had weathered the storm and settled on a stronger new foundation.

Her name is Carly Fiorina, and I’m proud to endorse her for U.S. Senate.

Carly is the Commonsense Conservative that California needs and our country could sure use in these trying times. Most importantly, she’s running for the right reasons. She has an understanding that is sorely lacking in D.C. She’s not a career politician. She’s a businesswoman who has run a major corporation. She knows how to really incentivize job creation. Her fiscal conservatism is rooted in real life experience. She knows that when government grows, the private sector shrinks under the burden of debt and deficits. We can trust Carly to do the right thing for America’s economy and to make the principled decisions she has throughout her professional career.

Please consider that Carly is the conservative who has the potential to beat California’s liberal senator, Barbara Boxer, in November. I’m a huge proponent of contested primaries, so I’m glad to see the contest in California’s GOP, but I support Carly as she fights through a tough primary against a liberal member of the GOP who seems to bear almost no difference to Boxer, one of the most leftwing members of the Senate. Carly needs our support in this crucial election year when we have a real chance of putting an end to the Pelosi/Reid "Big Government" agenda.

I hope you’ll join me in supporting Carly. Visit her website here, and follow her on Facebook and Twitter. Read up on her positions and plans to help get us on the right track.

California is still Reagan Country, and Carly promises her "Reagan Conservative" values will be put to good use for her state and for our great nation. Shaking it up in California is long overdue. Let’s help Carly do it!

Update: I’d like to add a few things about my Carly endorsement because some reaction right out of the chute calls for more information:

Carly has been endorsed by the National Right to Life, the California Pro-Life Council, and the Susan B. Anthony List. She is pro-life, pro-traditional marriage, pro-military, and pro-strict border security and against amnesty. She is against Obamacare and will vote to repeal it and prevent the government takeover of private companies and industries. Carly is also a strong supporter of the Second Amendment. Like me, she is a member of the NRA, has a 100% NRA rating, and she and her husband are gun owners. She is pro-energy development and believes as I do in an all-of-the-above approach to energy independence. She is against cap and tax. And most importantly, Carly is the only conservative in the race who can beat Barbara Boxer. That’s no RINO. That’s a winner.

If you notice, Sarah had to do a little bit of an update. It seems that some don’t understand why Sarah made this bold move and endorsed Carly over Chuck DeVore who some consider the "real" conservative. Though I’m in Texas, both I and my West Coast buddy Stacy Drake kind of liked Chuck DeVore.. We hoped Sarah would take a look at Chuck.

The thing is, Sarah did take a look Chuck as well as Carly, in context of the big picture. Here’s the deal, extensive polling shows that DeVore had peaked, and was backing up, losing ground, while liberal "Republican" Tom Campbell was barely edging out Carly for the nomination. Sarah looked at this and knew she had to shake things up.

Electing Tom Campbell would be like giving Barbara "Don’t Call Me Ma’am" Boxer another six years. Campbell is not simply a RINO (Republican in name only) he is, to borrow from Mark Steyn, a DIABLO (Democrat in all but name only)

He's pro-abortion, has an "F" rating from the NRA, pro-gay marriage, pro-cap and tax, and so on.Campbell has taken campaign donations from a convicted terrorist, which makes him a lot more like Barack Obama than most in the Republican Party would like! Here’s the thing that I imagine really set Sarah off though: Campbell has consistently voted against supporting Israel, and as someone who has repeatedly taken Obama to the woodshed for his personal jihad against our Jewish friends and allies, one just can’t see Sarah putting up with that in her own party.

In short, Tom Campbell is De De Scozzafava on steroids! Not exactly what our nation needs.

As for DeVore, he has his own issues,... with ethics,... and we know what Sarah thinks of unethical politicians, now don’t we! Seems that DeVore was using [taxpayer] money from his state office to pay his campaign staff. That’s a very big deal.

While we are talking about DeVore, he and his people showed their true colors today. Many of us liked the guy, but he, his staff, and supporters threw a hissy fit when Sarah announced she was going to endorse Carly. DeVore’s spokesman Joshua Trevino had this to say about his boss's failing campaign:

This kinda reminds me of the guy who asks the most popular girl to the high school prom, gets turned down, and then decides to go key her car as revenge. Very immature.

BTW...the "sheepdog" reference comes from the infamous Demon Sheep ad attacking Tom Campbell for lying about being a fiscal Conservative:

Remember now, DeVore sought Sarah’s endorsement, which make the reaction by him and his supporters a real turn off. There’s no crying in politics Chuck!

Stacy Drake offers up her must read take on all of these developments, as a Californian, here.

The bottom line on all of this is quite simple really. Tom Campbell is unacceptable, and Chuck DeVore is simply unelectable. So unacceptable is Campbell that leaving Senator "Don’t Call Me Ma’am" in office is almost more preferable! Campbell is more dangerous than Senator Boxer. At least Boxer has never taken money from a convicted terrorist Tom Campbell has! And despite her really long list of faults, Barbara Boxer has never failed to support Israel. Tom Campbell, on the other hand, sides with the Obama regime and share’s the disdain for our friends and allies.

In short...electing Tom Campbell would be a total disaster for the nation.

Sadly, for those who support DeVore, even after he and his supporters lack of class and professionalism, all you may succeed in doing is electing Tom Campbell.

With that thought in mind, we are enthusiastically endorsing Carly Fiorina and encourage our readers to do the same. Carly was the CEO of Hewlett-Packard. She is the only one in the race who has ever had to make payroll. Not sure about anyone else, but I think we need more seasoned business leaders and a hell of a lot less trial lawyers and "constitutional law professors" in D.C. How about you?

Sarah Palin is a true leader. She has looked at things, seen what must be done, and picked a winner, someone of principle, who is herself a leader. Sarah has shaken things up for the good of the team. I bet if Roy was still with us, he’d smile in approval and say "Let’s go!"

Carly is known for her rather inventive and entertaining campaign ads, and I agree with my pal Stacy, this is one of the best campaign ads ever. Simply epic. Enjoy: