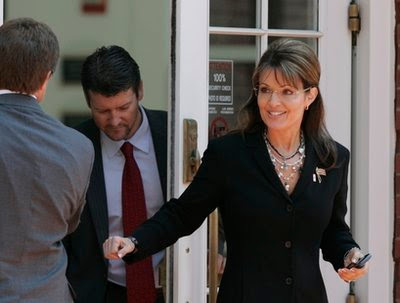 Sarah Palin was in Knoxville Friday morning giving testimony in the trial against David Kernell, the son of longtime Tennessee democrat legislator Big Mike Kernell, who is charged with hacking into her e-mail account during the 2008 presidential campaign.
From the Associated Press:

Sarah Palin testified Friday about the disruption and hurt caused when her e-mail account was hacked during the 2008 presidential campaign and said outside court that there should be consequences for what happened.


She declined to say if she thinks conviction of the 22-year-old defendant should lead to prison or if community service would be punishment enough. "That’s up to the judge," she said when she stopped to talk to reporters outside the courthouse.


Former University of Tennessee student David Kernell, the 22-year-old son of a Democratic state lawmaker, is charged with hacking the Yahoo! e-mail account as Palin campaigned in 2008 as the Republican vice presidential candidate.


Kernell faces up to 50 years in federal prison if convicted of identity theft, mail fraud and two other felony charges. His lawyer has said the case is a prank and Kernell had no criminal intent.


Asked outside the courtroom if she thought the charges against Kernell were excessive, Palin said, "I don’t know, but I do think there should be consequences for bad behavior."


As Palin walked to the witness stand, some jurors smiled at her. The first question from Assistant U.S. Attorney Greg Weddle was, "May I call you Governor Palin?"


The former Alaska governor smiled almost constantly through 30 minutes of testimony as she told jurors about the disruption the hacking caused for her family and close friends when their e-mails and phone numbers were publicized on the Internet.


The posting of family photos and e-mails on the web fueled rumors that Palin and her husband had affairs and that her youngest child, Trig, was not really her son, she said in court.


Palin's husband, Todd, sat in the courtroom as she testified. Their daughter, Bristol, told jurors earlier this week that she got harassing calls and text messages after screen shots of e-mail from the account revealed her cell phone number. A former Palin aide also described receiving vulgar e-mails.


Kernell isn't accused of the harassment, but prosecutors say he broke into Palin's e-mail account in September 2008 by correctly providing her birth date and ZIP code and correctly answering that she met her husband in Wasilla, Alaska.


Kernell's attorney, Wade Davies, argued the password was obtained using information that was publicly available, including where she met her husband.


After the e-mail was hacked, prosecutors said Kernell bragged about it in obscenity-laced Internet postings. An FBI computer forensics specialist and other witnesses testified about photos of the Palin children and a reference to Bristol as "the prego one."

You can read more and see more video here.
Sarah  talked to the media after testifying:
Stacy Drake has coverage of Sarah’s appearance with Greta Van Susteren where Sarah discusses the trial as well as the tough new Arizona law against illegal immigration. You can see that here.
Meanwhile, an FBI computer forensics expert, Agent Stephen McFall, testified before the court on Thursday about the lengths Kernell went through to cover up his crime.

The FBI probe was stymied by a series of steps authorities allege defendant David Kernell took to cover his tracks, including deleting from the computer material gleaned from Palin's account, clearing his Internet history on one web browser, uninstalling another browser and running a Windows tool designed to speed a computer up by overwriting space occupied by deleted files.