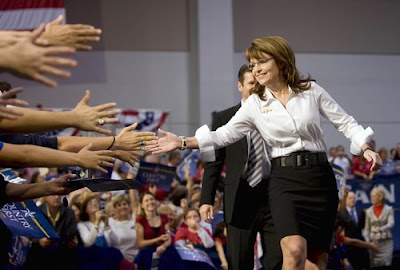 Sarah Palin’s status as a superstar is undeniable. She is incredibly popular nationwide. According to the latest report from Mike Allen, over at Politico, Sarah Has almost 1100 invitations to speak at events nationwide.

This week Sarah will begin accepting invitations to those speaking engagements.

As we all know, unscrupulous promoters have been inviting Sarah to events for months, and advertising this, boosting ticket sales, without having any commitment from Sarah whatsoever.

As an old drag racing promoter, I know if we pulled stunts like this, the fans (and the racers themselves) would’ve skinned us alive! Evidently though, this sort of thing is common in the political world.

What is aggravating though, is the fact that these promoters get all kinds of publicity, because of Sarah Palin, and even though they never had any commitment from the Arctic Fox, their ticket sales soar, and when Sarah doesn’t show up they try and blame it on her.

Our policy is to never even talk about speaking gigs unless Sarah herself, or her spokeswoman Meg Stapleton issues a press release about it.

OK, enough of that!

Basically, if Sarah herself doesn’t promote it, it probably isn’t true, and ain’t happening !

Sarah has over 950 offers for paid speaking engagements, many of them are six figure deals. And over 120 politicians have asked her to come and speak on their behalf. I’m sure they all understand the incredible effect she had on Senator Saxby Chambliss’ re-election bid, which went from a dead heat race before Palin came to visit, and turned into a 16 point blowout after Sarah spent one single day addressing huge crowds on his behalf.

Sarah had offers from twenty speaker’s bureaus to represent her and chose the Washington’s Speakers Bureau. This is the group that represents a variety of folks from George and Laura Bush to Bob Woodward and Katie Couric to Alan Greenspan, Colin Powell and Rudy Giuliani.

Sarah will be doing both paid speaking engagements as well as unpaid speeches to political and charitable organizations, including groups that support families with special needs children and those who support the military and their families.

I must stress that Sarah has made no commitments whatsoever to any speaking engagements. My best advice to folks who hear that she is speaking somewhere, is to check out her Facebook page. Sarah uses Facebook extensively to communicate with the nation.

It’s also said that Sarah is about 85 percent finished with her book that will be published by HarperCollins and available in the spring of 2010.

Sarah’s lawyer, Robert Bennett, has also compiled a workbook about an inch and a half thick filled with offers for TV and radio shows, and other interesting business opportunities. Sarah will begin going through this, as well.

Sarah Palin has some serious jazz. Since she has been so busy behind the scenes, she has taken to using her Facebook page as a highly effective communications tool. We all know what she was able to do by typing two short paragraphs a few weeks ago!

The growth of supporters on her page has been nothing short of phenomenal.

As I write this Sarah has almost 850,000 people listed as friends on her page. And thousands are joining daily. To put this into perspective, here is what the numbers on Facebook look like for those who as touted as other important Republican politicians:

In the last few weeks Sarah has had more new supporters join her, than all of the above, combined, have supporters on their pages.

Sarah is the one Republican who has really mastered using the internet to gain an audience. And what she says gets results. As we have already mentioned, she totally changed the debate on national health care when she spoke of death panels. And when Barack Obama and the state run media attacked her, she calmly retorted with tons of information about those involved with Obama, like Dr Death, Dr Ezekiel Emanuel, and others who would indeed create death panels.

She also encouraged millions to actually read H.R. 3200, the House bill that most represents Obamacare, a 1017 page monstrosity that amounts to the total usurpation of the United States Constitution. And folks have indeed read this bill by the millions. America is not pleased by what they read!

We’ve written a bit about Glenn Beck’s efforts to expose Obama and all of the illegal and unconstitutional Czars Obama has appointed to powerful posts. Sarah noted this as well, and on Wednesday of last week asked all of her Facebook friends to join her in watching Glenn Beck’s Fox News program.

The result? Beck’s show gained over one million new viewers over the previous day, making it the number one news show on cable, beating out ratings giant Bill O’Reilly. And those viewers stayed with Beck throughout the rest of the week.

With the power Sarah Palin has just by posting short notes on Facebook, one can only imagine the effect she will have on the national debate once she hits the road and starts really speaking out against Obama and his tyrannical government!

By God, I almost feel sorry for Obama and his democrat/communist party!