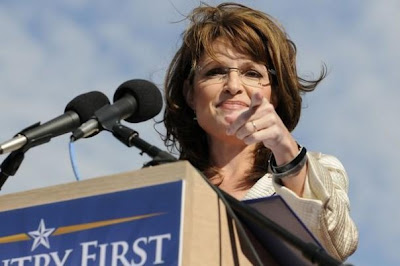 Fresh off of taking the health care debate to a whole new level, and exposing the immorality of it all, Sarah Palin has released some very interesting statistics that prove her bonafides on health care issues.

Released through her Facebook page, Palin lays out how she fought the Alaska Legislature to make sure senior citizens didn’t have to wait for quality health care.

Now obviously this shows that Sarah is someone who gets things done. Someone who actually serves the people. But more importantly, this proves what Sarah and all of those who oppose Obama’s attempt to forcibly destroy the best health care in the world have been saying.

What could be a better predictor of how things would end up with the government running health care?

Yes, there will be health care rationing, that’s what was going on in Alaska until Sarah stepped in. Unfortunately, under Obamacare, there will be no one to intervene on behalf of America’s senior citizens.

You know, this sort of thing is exactly what Sarah was talking about when she used the words "death panels."

Now of course, the media, the democrat/communists and our RINO friends all blew a gasket over that comment and ran around trying to deal with it. Even Obama was compelled to clumsily try and refute it in his Portsmouth, NH faux townhall event.

These Ivy League brainiacs couldn’t understand what all of us uneducated rubes know instinctively. Now will there LITERALLY be "death panels," a group of people that an individual will have to stand before and be judged?

These government types aren’t brave enough to face people in person. But there will be a group of "medical advisors" who will make up a board that determines who is eligible, as a group, for certain health care procedures. This group will look at cold hard data, not warm human beings as they decide.

The other problem is money. America is already broke. We owe more money now than we can ever pay back. As this actually starts effecting the government’s ability to function, there will be rationing and long waits for service. It’s inevitable.

Every nation that has socialized medicine rations care. People die quite often waiting for doctors to treat major illnesses. There are plenty of stories of people in nations with socialized care who die of cancer that could have been successfully treated had they gotten early care and diagnosis.

All of these things, and more are what Sarah was talking about when she spoke of the metaphoric "death panels." These panels are the ones who set up the standards and practices as well as the bean counters who have to stick to a budget.

But enough of that, let’s look at the release from Sarah Palin"s office:

On May 23, 2007, using a rarely invoked emergency regulation, Governor Palin ordered assistance benefits to continue for Alaska’s neediest seniors after the Alaska legislature failed to fund the SeniorCare Program. After her action, the legislature responded, and on July 28, 2007, Governor Palin signed Senate Bill 4 to continue support for low-income Alaskan seniors by adopting the Senior Benefits Program. "This program continues important assistance to Alaska seniors," Governor Palin said. "I promised that seniors would not go hungry, and we worked with the Alaska Legislature to address this critical need." It was estimated that 10,700 Alaskan seniors would be able to benefit under the program.

Also under Governor Palin’s tenure, on December 19, 2008, the state stepped in and took over the Mary Conrad Center, an Anchorage nursing home, when the state determined that there was "'immediate danger to the health, safety or welfare' of its residents."

So, with this clear record of support and care for Alaska’s seniors by Governor Palin, what is the current criticism about? According to the United States Department of Health and Human Services, prior to Governor Palin’s election in November 2006, in April of 2006, in an effort to control rapidly increasing costs for home health care providers, known as the PCA program, Governor Frank Murkowski’s administration implemented a screening process for Alaska Medicaid eligible persons by using a Level of Care assessment (LOC). The LOC assessment was designed for persons who would otherwise require hospitalization or nursing home care and was intended to help weed out fraud and abuse.

By definition, many of these people were ill, elderly or disabled and thus in need of personal care attendants to assist them. Only registered nurse assessors were allowed to evaluate consumers to determine if they qualified for PCA care. The job of assessing consumers was contracted out, but the State of Alaska DHHS determined that the hired contractor had too much backlog. Notably, under federal Medicaid strictures, the State could not get another private business to bid on the contract. So the State was forced to take over the job in November 2007. However, the State DHHS was unable to eliminate the backlog using its own staff, and the backlog then grew. The Federal DHHS temporarily suspended new admissions to the PCA program pending audit compliance to handle the backlog of existing cases and come up with a plan to speed the assessment process. The suspension has been lifted as of August 12.

Further, Gov. Palin’s FY 2009 budget clearly showed her analysis of the issue as of December 2007, and described both the problem and the solution long before the federal government got involved. The backlog issue was discussed and a plan proposed for improvement.

The graph below shows that under Gov. Palin (2007 and 2008) the backlog problem was dramatically reduced, from 30.9% in 2005 to 4.5% in 2008. Looking at these data, one can conclude that Gov. Palin substantially reduced the outstanding percentage of Medicaid assessments by 83%. 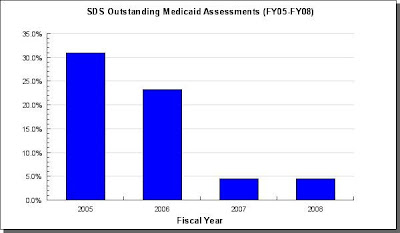 What is the lesson in all of this? Even with good intentions, the government generally cannot provide better health care services than the private sector. Beware of complex federal laws purporting to offer government health care. For those who want nationalized medicine, take heed of this lesson."

More information can be found here.

Time and time again Sarah Palin proves that she has the leadership qualities America is looking for. While the NYC/D.C. Beltway "educated elites" are stuck in a quagmire of mediocrity and confusion, Sarah has already been there, done that, and got the t-shirt from it!

Sarah’s experience with government run health care, and it’s dangerous and disastrous effects on human beings, should serve as a major warning to all. You do not want the government to have anything to do with how you basic needs to quality health care are met. Might as well commit suicide and get it over with.

It still amazes me how the Republican party is tackling this issue. Now granted, there are some sharp folks working behind the scenes crafting real reform, but they aren’t getting themselves heard. For the most part though the message from the Republicans to the democrat/communists is a hearty "slow down."

Sarah Palin’s message to the democrat/communists is "Not no, but HELL no!"