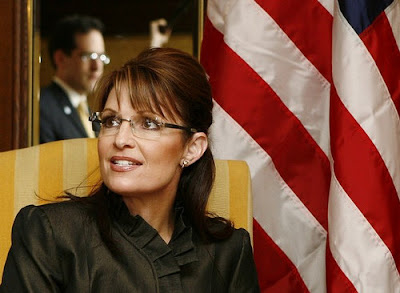 Sarah Palin has just hit on the one issue Obama and his death cult do not want to discuss, and that is tort reform. Out of control lawsuits, sky high malpractice insurance, and doctors running more tests than needed, just to cover their tails, is all part of the single largest expense in American health care that can easily be remedied.

Tort reform is key. To "fix" healthcare, without major tort reform, would be like going in to do open heart surgery on someone, but not actually working on the heart!

We all know the stories of the trial lawyers who have gotten rich with bogus lawsuits. One of the most egregious practitioners of these phony baloney lawsuits is newly minted baby daddy John Edwards. Edwards became a multi-millionaire ambulance chaser by specializing in suing on behalf of children with cerebral palsy.

Edwards, a shyster deluxe, even went so far to "channel" unborn babies during his courtroom antics. Thanks to this one unscrupulous attorney, malpractice insurance went through the roof, many doctors quit their specialties, or went bankrupt.

But even worse, cases of cesarean birth dramatically increased, as Edwards used his greed, and junk science to convince people that natural childbirth was the culprit and cause of all of these cases of cerebral palsy.

Now besides the extra costs involved, having a cesarean birth is dangerous for the mother, as infections can easily set in, and of course, recovery is longer. But who cares, John Edwards sure has a nice house, doesn’t he!

This is just one guy who cost hospitals, doctors, and insurance companies hundreds of millions of dollars during his career. There are lawyers like him all over the country just waiting for their next payday.

Turn on the television. If you watch for any length of time, you will see dozens of ads from big law firms actively seeking defendants for all sorts of cases. Not saying all of them are bogus, but when you see people resorting to advertising nationally for victims, you have to wonder just how big the problem truly is or isn’t, and conclude it’s all about the Benjamins!

Of course, another issue people overlook in this, is the fact that lawyers are so busy chasing high profile, big paydays, that many cases that are real get shoved aside because they won’t make the attorney a huge payday. Small cases don’t add a new wing to the family compound!

As a Texan, I can say that tort reform works. Texas passed major tort reform years ago, capping damages one could get for "pain and suffering." They also beefed the medical boards to investigate doctors suspected of having issues.

The result? As Sarah points out, thousands of doctors have moved to Texas. This has had a huge impact, especially in rural areas. Where there were once shortages of doctors, now there is coverage.

I live in a hospital town, we are home to a hospital that started out in a log cabin, which is still on the grounds, that has grown into a regional system of hospitals and clinics, and even has it’s own health care insurance plan.

Seeing a doctor here is an easy, very friendly process. Even though the complex is huge, the effort is to make sure every patient has their own regular doctor who is able to meet their needs. Very user friendly.

It is also a teaching hospital and is part of the Texas A&M system.

This is what happens when government is responsible, then gets out of the way.

I agree with Sarah Palin 100% on tort reform. For Barack Obama and the rest of his communist party to talk about "health care reform" without tort reform is beyond ridiculous, and it borders on criminal.

Of course, we all know that actually "reforming" health care is the last thing on these people’s minds. This is all a big power grab, and an attempt to completely usurp the Constitution of the United States. Anyone who has actually read HR 3200 knows that monstrosity is nothing more than a gateway to a complete communist state. It is a liberty and freedom stealing document that needs to be burned!

Lets get serious and get behind Sarah Palin. No tort reform, no health care bill.

President Obama's health care "reform" plan has met with significant criticism across the country. Many Americans want change and reform in our current health care system. We recognize that while we have the greatest medical care in the world, there are major problems that we must face, especially in terms of reining in costs and allowing care to be affordable for all. However, as we have seen, current plans being pushed by the Democratic leadership represent change that may not be what we had in mind -- change which poses serious ethical concerns over the government having control over our families’ health care decisions. In addition, the current plans greatly increase costs of health care, while doing lip service toward controlling costs.

We need to address a REAL bipartisan reform proposition that will have REAL impacts on costs, and quality of patient care.

As Governor of Alaska, I learned a little bit about being a target for frivolous suits and complaints (Please, do I really need to footnote that?). I went my whole life without needing a lawyer on speed-dial, but all that changes when you become a target for opportunists and people with no scruples. Our nation’s health care providers have been the targets of similar opportunists for years, and they too have found themselves subjected to false, frivolous, and baseless claims. To quote a former president, "I feel your pain."

So what can we do? First, we cannot have health care reform without tort reform. The two are intertwined. For example, one supposed justification for socialized medicine is the high cost of health care. As Dr. Scott Gottlieb recently noted, "If Mr. Obama is serious about lowering costs, he'll need to reform the economic structures in medicine—especially programs like Medicare." [1] Two examples of these "economic structures" are high malpractice insurance premiums foisted on physicians (and ultimately passed on to consumers as "high health care costs") and the billions wasted on defensive medicine.

"The medical liability crisis has had many unintended consequences, most notably a decrease in access to care in a growing number of states and an increase in healthcare costs.

"If the Kessler and McClellan estimates were applied to total U.S. healthcare spending in 2005, the defensive medicine costs would total between $100 billion and $178 billion per year. Add to this the cost of defending malpractice cases, paying compensation, and covering additional administrative costs (a total of $29.4 billion). Thus, the average American family pays an additional $1,700 to $2,000 per year in healthcare costs simply to cover the costs of defensive medicine.

Excessive litigation and waste in the nation’s current tort system imposes an estimated yearly tort tax of $9,827 for a family of four and increases healthcare spending in the United States by $124 billion. How does this translate to individuals? The average obstetrician-gynecologist (OB-GYN) delivers 100 babies per year. If that OB-GYN must pay a medical liability premium of $200,000 each year (which is the rate in Florida), $2,000 of the delivery cost for each baby goes to pay the cost of the medical liability premium." [3]

You would think that any effort to reform our health care system would include tort reform, especially if the stated purpose for Obama’s plan to nationalize our health care industry is the current high costs.

So I have new questions for the president: Why no legal reform? Why continue to encourage defensive medicine that wastes billions of dollars and does nothing for the patients? Do you want healthcare reform to benefit trial attorneys or patients?

Many states, including my own state of Alaska, have enacted caps on lawsuit awards against health care providers. Texas enacted caps and found that one county’s medical malpractice claims dropped 41 percent, and another study found a "55 percent decline" after reform measures were passed. [4] That’s one step in health care reform. Limiting lawyer contingency fees, as is done under the Federal Tort Claims Act, is another step.

The State of Alaska pioneered the "loser pays" rule in the United States, which deters frivolous civil law suits by making the loser partially pay the winner’s legal bills. Preventing quack doctors from giving "expert" testimony in court against real doctors is another reform.

Texas Gov. Rick Perry noted that, after his state enacted tort reform measures, the number of doctors applying to practice medicine in Texas "skyrocketed by 57 percent" and that the tort reforms "brought critical specialties to underserved areas." These are real reforms that actually improve access to health care. [5]

Dr. Weinstein’s research shows that around $200 billion per year could be saved with legal reform. That’s real savings. That’s money that could be used to build roads, schools, or hospitals.