Like Barack Obama, Michele Bachmann Puts Political Expediency Ahead of Principles in Her Life 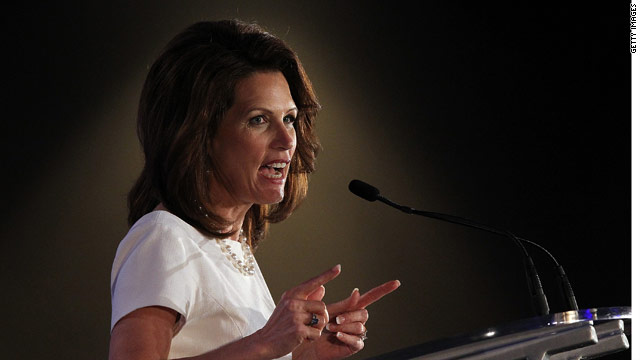 When I first heard stories about Michele Bachmann's church, I sort of blew them of as typical left wing demagoguery, especially since the story first appeared in the far left Atlantic, a little sewer that for years employed free lance gynecologist Andrew Sullivan, who turned studying Sarah Palin's uterus into a cottage industry.

Even though I'm not inclined to defend Michele Bachmann, especially after the Tuscon shootings when Bachmann, who has loudly anointed herself the "leader" of Tea Party, was nowhere to be found when the entire Tea Party, and Sarah Palin, were accused of mass murder, after left winger Jarred Lee Laughner went on his murder spree. That told me all I needed to know about Michele Bachmann and her character. [or lack there of]

That said, I didn't think it was proper to spread what was likely nothing more than B.S. Then a funny thing happened that legitimized the story, and gave us a little more insight into the real Michele Bachmann.

First the church. For over a decade Michele Bachmann was a member of a church that says on it's website in a piece entitled "Statement on the antichrist" that the Pope is the antichrist. Now say what you will about the Church of Rome, but the Pope is not the antichrist by any stretch of the imagination.

I know it's not as bad as Barack Obama sitting in Reverend Jeremiah "God Damn America" Wright's church for 20 years, but it's pretty bad. And just like Obama who can claim [lie] that he never heard one of Wright's anti-American, Jew hating rants, Bachmann has no out, because this teaching is front and center in the church. It's right there on their website.

Now I know you are sitting there getting ready to tell me off, but there is even more to this deal. You see, the Bachmann's KNEW this whack-job church was going to be a problem, and less than a week before she announced she was running for president, she quietly bailed out on them. Glenn Beck's website, The Blaze calls it "another Reverend Wight moment."

This tells me she knew this was going to turn normal people off, and hoped she could distance herself from this bunch, rather than defend her faith. After all, plenty of Catholics vote.

Bachmann, who uses her religion as a campaign tool, proudly listed the church on her 2006 congressional campaign website. [when no one was paying attention to her] Her new site lists no church.

Bachmann was asked about her status with the church on Thursday at Reagan National Airport as she headed to catch a flight. When asked about her pastor, she asked, "Which one?" An aide quickly hustled her away, noting that they were late for a flight.

So much for openness and honesty. Bachmann is showing herself to be nothing but the typical Washington establishment politician more and more every day.

You can read the full story here.

Look, anyone can go to any church they want to. Obama obviously sat in a church for 20 years that promoted extreme anti-Americanism, hatred of Jews, and supports terror groups like Hamas. As an American, that's his right, of course we have seen what that environment of over the top hatred produced in Obama.

Now I have no idea what the sermons at Bachmann's now former church are like, but I do know I haven't seen the over-the-top hatred of gays like I have from the Bachmanns in a long time. Michele's husband, Marcus, says gays are "barbarians" who need to be need to be educated and must be disciplined. I supposed that happens at his bogus de-gaying clinic, I don't know.I do know there is a lot of hate coming from those two for the fellow human beings.

What I know for sure, is the Bachmanns had no problem attending this church until it became a perceived political liability, then it was under the bus with them, just as Obama threw his beloved pastor under the bus when he became a liability.

Many already look at Michele Bachmann as little more than "Obama in a skirt" because she has no experience, and no achievements, but frankly, that is a disservice to Obama. While Obama had no record as a state or US Senator, and no accomplishments at those jobs, he did run terrorist Bill Ayers' phony "education" foundation and handled a roughly $60 million budget. From all accounts, Bachmann can't even manage her own small congressional staff.

Washington is full of people who put politics over principle, and try to hide things from the American people, so Michele Bachmann is certainly nothing special in this regard, but that's the problem, isn't it?

We are trying to rid Washington of people like this. People who only look out for good old number one.