After A Phenomenal Opening Weekend: Sarah Palin Documentary "The Undefeated" to Expand to Additional Cities This Weekend 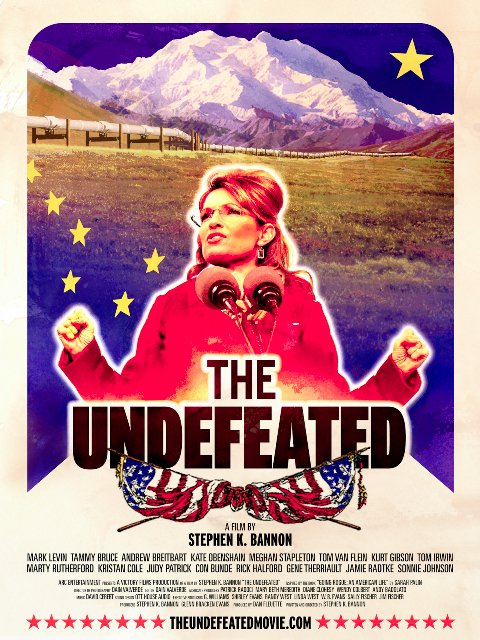 $11,000-plus per screen weekend averages in Orange County and Phoenix.

As we told you yesterday, The Undefeated has far exceeded expectations set by the film's creators, Victory Films. On the heels of a great opening weekend, Victory is announcing the movie will expand into new markets, and continue to be shown in the theaters where it opened.

With sold-out runs and enthusiastic audience support on opening weekend, the film will roll out to new markets including Tucson, AZ; West Palm, FL; Milwaukee, WI; Charlotte, NC; and Ontario, CA. The film will also expand into additional theatres in Atlanta, GA, and Phoenix, AZ, and will continue in theatres in Dallas, TX; Houston, TX; Denver, CO; Orlando, FL; and Orange, CA.

ARC Entertainment, the distributor of the film, announced today that the film had a stronger opening weekend than expected with the top markets, Phoenix and Orange County, achieving weekend per screen averages above $11,000 driven by multiple sold-out runs. The film was rushed to select digital theaters in only three weeks, and was marketed entirely through social media and grass roots efforts with virtually no traditional media spend.

"Given the audience response on our opening weekend we now know we have a film that works. Our objective is very simple to bring this film to every market and every corner of the country; starting with a limited theatrical release and then through an aggressive broader distribution strategy including streaming video, on-demand access and DVD," stated filmmaker Stephen K. Bannon.

Trevor Drinkwater, CEO of ARC Entertainment, said, "We have been inundated with requests from around the country to have the film play in their market. Our expansion plan is being methodically analyzed and managed to allow the film to be viewed by the widest audience in the most effective manner."

This coming Friday the film will play in the following AMC theaters:

"We are thrilled that The Undefeated can benefit from the digital cinema platform to quickly expand to additional markets this weekend," said Jonathan Dern, president of Cinedigm Entertainment Group.

"After the incredible feedback we got from enthusiastic audiences, we are very excited to bring this story of a true American hero to additional audiences across America," said Glenn Bracken Evans.

AMC Entertainment Inc. delivers distinctive and affordable movie-going experiences in 360 theaters with 5,128 screens across the United States and Canada. The company operates 24 of the 50 highest-grossing theaters in the country, including the top three. AMC has propelled industry innovation and continues today by delivering premium sight and sound, enhanced food and beverage and diverse content. www.AMCTheatres.com

Victory Film Group develops, produces and distributes documentaries and films that address today’s leading political, socio-economical and cultural issues while incorporating the conservative perspective. Victory Film Group’s motion pictures are considered amongst critics to be one of the best conservative-themed collections in film history. www.victoryfilmgroup.com