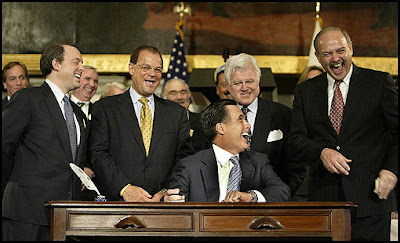 It seems human windsock Mitt Romney can't figure out which way the political winds are blowing in the heated debate over what to do regarding our unsustainable debt, so rather than take a stand, he does what he always does when the going gets tough, he hides out.

Romney still hasn’t taken a position on Boehner’s bill: NBC’s Garrett Haake reported that Mitt Romney told reporters in Ohio yesterday that he would not comment on the debt negotiations in Washington. And so far, he has refused to either endorse Boehner’s legislation (as Huntsman has done) or oppose it (as Pawlenty and Bachman have done).

Our question: How does someone who wants to be the leader of the Republican Party not have a position on one of the biggest issues facing Washington, especially after the dueling primetime speeches by Obama and Boehner? It's actually quite surprising; this isn't just another Washington fight. Is the lack of a position proof of how fragile Team Romney believes its front-runner status is right now?

Leaders lead and Romney is no leader. For years we have been told that Romney is the "money guy." The one that understands business and the economy. This situation is the one Romney supporters would have you believe is tailor made for their boy, and yet, when asked about his position, he punts. A real Profile in Courage this Mitt Romney is.

This is the time for leaders to stand up and be heard. Romney's silence is deafening.
Posted by Gary at 2:29 PM