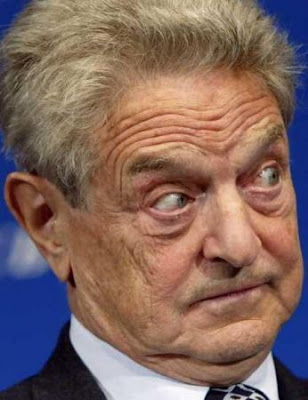 I’ve written before about some of the connections between the groups attacking Sarah Palin and both George Soros and Barack Obama. They are all intertwined. And as Soros’ group MoveOn.org famously said after the 2004 presidential election, regarding the democrat party: "It’s ours, we paid for it!"

MoveOn came into being during the Clinton/Lewinsky scandal that saw President Clinton impeached for lying under oath during a sexual harassment law suit, as well as suborning perjury when he asked Monica Lewinsky to do the same.

The who idea was to get America to "move on" from the Lewinsky scandal. Since then, the Soros funded group has morphed into just another arm of the democrat party.

I have referred to Soros as a real live version of the James Bond villain Ernst Stavro Blofeld, or even a non endearing version of Mike Myers’ Dr Evil. But there is absolutely nothing funny about Soros, and unfortunately, there is no 007 working to stop him. But make no mistake, Soros is just as dangerous as anything to come out of Ian Fleming’s fertile imagination.

As this little primer points out, Soros is an evil man who has spent a lifetime destroying others for his benefit. He survived WWII by being a Nazi collaborator. He made in billions by manipulating currency, and profiting off of others suffering. He is very far left leaning, is most definitely a communist, like Barack Obama.

My friend, the Red Diva has put together a great bit of information on George Soros, a follow the money sort of thing that I’d like to share with all of you. With her permission, of course.

Governor Sarah Palin’s resignation speech of July 3, 2008, along with the reasons she provided, were obviously exactly what the Palin supporters wanted to hear. When the funding report for Palin’s SarahPAC was filed with the Federal Election Commission (FEC), the Anchorage Daily News (ADN) reported that through June 30, the political action fund had received almost $733,000 in donations since being established roughly six months ago. Meg Stapleton, SarahPAC spokesperson, added that since the resignation announcement, another $200,000 has been received.

Following her announcement in early July, Governor Palin began speaking out about the injustice she sees with Mr. Obama’s new policies for America. One of the areas in which the knowledge and wisdom of Sarah Palin should have special attention paid is her expertise in the field of energy. She wrote an op-ed piece which appeared in the Washington Post on July 14, 2009. She correctly pointed out the short-comings of the cap-and-trade bill Mr. Obama has pushed so secretively to the American people using his Democrat – controlled Congress.

On a day when Andree McLeod filed yet another ethics charge (number 20, if you’re counting), CNN is now reporting that MoveOn.org has begun sending e-mails to its members asking them to fund a response ad "blasting Palin’s new Washington Post op-ed. "MoveOn.org is trying to make the supporters of Governor Palin believe that her article was "a marvel of misinformation and outright lies." Her supporters, of course, will not believe this effort to smear Governor Palin’s wealth of knowledge in this area, but rest assured this is nothing more than another George Soros attack.

George Soros is the "pocket" the money is coming from to fund the Democratic Party attacks on Governor Palin, and he has plenty of it to dole out. MoveOn.org is just one of the many front organizations allowing him to more securely implant Socialism into America. His OSI (Open Society Institute) is the manner he uses to fund all of his puppet organizations, only one of which is the Democratic Party.

He and his "institutes" and "organizations" provided the money that has been used in every effort to belittle Governor Palin. ACORN, Association of Community Organizations for Reform Now, is also behind the voter fraud that occurred during the presidential election of 2008 in various states, and he had the money to dissuade the states involved from pursuing the illegalities in a court of law where they should have been taken for criminal prosecution.

There have been times when it is painfully obvious that George Soros is behind all of these efforts. Such was the case in the CREW (Citizens for Responsibility and Ethics in Washington) attempt to dissuade the positive public opinion of Governor Palin as they sought an FOIA in the Troopergate matter as well as the formal complaint they filed with the Federal Elections Commission in regards to the clothing purchased for her and her family by the Republican National Committee.

Please note I too Have written about Barack Obama's direct involvement in the troopergate smear, in which Governor Palin was ultimately found innocent of any wrong doing. Of course, the damage was done, as her exoneration didn't come until after the Presidential election. Obama managed to payoff Alaska Senator Kim Elton with a make work job at the Dept of Interior for his services in trying to hurt Governor Palin. Chicago politics at it's finest!

The previously mentioned ACORN involvement in the Democratic Party, LaRaza and Supreme Court appointee Sotomayer, and this newest MoveOn.org effort are also obvious attempts by George Soros to bring this coup against our Democracy and convert it to Socialism.

The fact that he "owns" the Democratic Party by the very donations that he makes both personally and through his front groups directly involves him in the attempts to ruin, both politically and personally, Governor Sarah Palin. His goal of a Socialist America is directly threatened by her and her supporters from grass-roots America. He knows that as long as she is speaking out, people will listen. He recognizes that the best way to halt her progress is to provide reasons to doubt her veracity.

What he hasn’t counted on is that the American people are not excited about having strings attached to our arms and legs and manipulated to do his bidding. Many of the American people are not, that is, because it does appear that the Democrats in America are willing. So far, they’ve been doing his bidding with what must be considered, by Soros, as disastrous results.

This latest attempt will end the same way.

Part of the methodology George Soros uses behind the scenes is known as the "Cloward – Piven" strategy. Cloward-Piven is a strategy for forcing political change through orchestrated crisis.

First proposed in 1966 by Columbia University political scientists Richard Andrew Cloward and Frances Fox Piven, the initial plan was to bankrupt the welfare system in America and introduce what could be considered as a radical change in replacing it. The main idea is to use a strategy of introducing crises.

The Cloward-Piven approach in this instance called for the welfare rolls to be swamped with new applications which would result in economic collapse leading to political turmoil and ultimately to Socialism.

The welfare crisis that bankrupted New York City in 1975 was the result of the use of this strategy by The National Welfare Rights Organization (NWRO), founded by African-American militant George Alvin Wiley.

The Cloward-Piven plan uses "aggressive community organizers" to create a crisis of militancy. Intimidated by violence, politicians would appeal to the federal government for assistance in handling the "crisis" through carefully orchestrated media campaigns by leftwing journalists to introduce a federal program of income redistribution much like Mr. Obama’s "share the wealth" plan during his presidential campaign.

Although the goal of the Cloward-Piven strategy itself was a Marxist society, George Soros has adopted it to his ideas of Socialism, put it to work in the Democratic Party, and with his careful honing of some of the "rough spots" made it into a much more efficient weapon against the American people than the original developers could have hoped.

This is the strategy George Soros is using against Governor Sarah Palin. It can be seen in the fact that as this article is written, twenty ethics complaints have been filed in Alaska by Alaskans who have been "bought and paid for" by the George Soros-funded and Cloward-Pivens Strategy-driven Alaska Democratic Party. It is the same strategy Soros has used and is using to force Socialism on the American people using one of his puppets, Barack Obama

Red Diva has written more about the money and connections between the Democrat National Committee and the various Alaska democrat operatives who have been steadily attacking Governor Palin since she was announced as a Vice Presidential candidates, and of course, I too have a catalog of blog entries on these underhanded and unethical democrats, as well.