Alaska Democrats Prove Beyond A Shadow Of A Doubt Sarah Palin’s Resignation Was A Genius Move...UPDATED 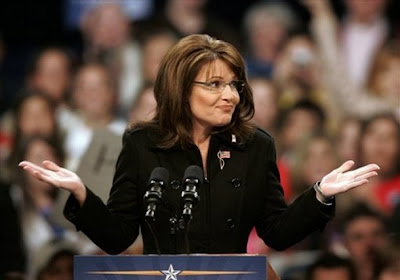 You know, at some point you just sit back and realize that some folks are just crazy. Maybe insane!

But I have to say, that in the long run, Sarah Palin’s decision to stand down, fall on her sword for the Alaskan taxpayers, was a genius move. Not only will she save the taxpayers millions of dollars, she will be free of this sort of nonsense that I doubt anyone else in public could withstand, especially with the grace and dignity in which she has comported herself.

As I wrote the other day, democrat hack Zane Henning couldn’t contain his joy when Governor Palin resigned and just had to prove her point and highlight her most self-sacrificing reason for leaving her job: The fact that these out of control democrats are costing, no, scratch that, STEALING millions of dollars and 1000's of man hours from the Alaska taxpayers with their severe case of Palin Derangement Syndrome.

You can go back and read all about that one.

But today, the loons struck yet again!

July 10, 2009 Fairbanks, Alaska – Governor Sarah Palin’s chief of staff, Mike Nizich, issued the following statement today on the occasion of the 19th ethics complaint being filed against the governor or a member of her staff:

"A week ago today, the governor told Alaskans that she was about to step down as governor in large part because of the campaign of harassment against this office, in which the Executive Branch Ethics Act has been repeatedly abused. Incredibly, since then two more ethics complaints have been filed against the governor, including one today.

"Typically, the first action by these complainants has been an illegal one – to announce the filing of the complaints to the news media, in clear violation of the mandatory confidentiality in the law. Unfortunately, unlike the legislative ethics act, there is no provision in the executive ethics act for a complaint to be automatically dismissed when it is publicized prematurely. Regardless of that, it is breathtakingly hypocritical for anyone to violate the ethics law in the very act of making an allegation against the governor."

"Although the governor would not have thought it possible, the latest complaint rises to a new level of absurdity in alleging that she has been paid for interviews that she has given to the news media. It is amazing to me that anyone could think that, let alone put their name behind it and once again seek to distract state officials and needlessly increase their work load. The state is losing the value of some of its expenditures when public servants are pulled away from important assignments to deal with far-fetched and mean-spirited allegations."

"The only saving grace in this recent episode is that it proves beyond any doubt the significance of the problem Alaska faces in the ‘new normal’ of political discourse. I hope this will be a wake-up call – to legislators, to commentators and to citizens generally – that we need a much more civil and respectful dialogue that focuses on the best interests of the state, rather than the petty resentments of a few."

Of the ethics complaints against the governor or her staff, 15 have been resolved without any finding of wrongdoing, and four are now pending.

One notices that it is illegal to release any details of an ethics complaint because of confidentiality laws.

Think about that. The first thing these "arbiters of public ethics" do is break the very law they claim they are wanting to uphold!

The complainant here is a fellow named Ray Ward. His other major claim to fame is that he once filed a suit against the Godfather of Soul himself, James Brown. Ward, for those who care, is a lifelong James Brown impersonator.

Sort of reminds you of this one, and this one.

There is most definitely something in the water in Alaska that effects liberals in an adverse way.

I hope once Governor Palin is out of office, that Governor Parnell, and his staff work toward reforming these ethics laws, adding strict punishment, as in jail time, for those who would file frivolous complaints repeatedly or break the confidentiality laws.

The rule of law is a two way street not a play ground for liberal democrats to harass those they disagree with. This technique of course is right out of Saul Alinsky’s Rules. The bible that is evidently given to liberals at birth!

Also right out of the CREW, (Citizens for Responsibility and Ethics in Washington) playbook, as well. CREW is a George Soros front group and is behind at least one complaint against Governor Palin, that we know of.

And independent of my own work, others have tied Barack Obama, directly to the effort to take Sarah Palin down, both before the election, and most definitely after. This has to be read to be understood.

These people are scared to death of her, and rightly so.

Of course, liberals, being liberals, they overreach. Just like Obama and his cronies are overreaching by trying to ram their agenda down America’s throat, at warp speed, these Alaskan democrats are doing the same overreaching and really overkill with this nonsense.

Every time they file one of these ludicrous "ethics complaints" they simply make Governor Palin’s point for her. They put an exclamation point on the fact that her self sacrifice for Alaska was morally the right thing to do, and something that few other politicians would ever have the integrity to do.

If we didn’t have such a totally worthless media, Sarah Palin would be heralded as a great statesman with a true servant’s heart. Fat chance that will happen with what passes for "reporting" these days.

As an aside, anyone catch Senior Washington Correspondent for Politics Today’s scathing indictment of the media and it’s total efforts to destroy Sarah Palin during the 2008 Presidential election and afterward? This is a fascinating piece of writing.

It deserves a Pulitzer, I wait with breathless anticipation.

One actually feels Sarah Palin’s sadness and disdain in this tweet from her Blackberry at around 9 pm Friday night:

I’ve asked this before of my fellow conservatives, and fellow Republicans. When is enough going to be enough? When are we, as a group, going to get serious about this sort of thing, and fight back?

Even if Sarah Palin isn’t your cup of tea, these tactics have been used by democrats on their enemies for decades. Never this aggressively, but used none the less.

At some point these unethical, and immoral, perversions of the political discourse will get around to someone you care about.

As Sean Connery’s .Jim Malone says to Kevin Costner’s Eliot Ness with his dying breath in The Untouchables: :What are you prepared to do!

This would be a good time to leave you with this video, and a call to invest in Sarah Palin by sending a donation to the Alaska Trust Fund to help defray this added burden.

It seems that Ray Ward's attorney in this matter is Rex Lamont Butler. Rex Butler is an Obama supporter who is basically acting as Bristol Palin's dead-beat dad ex-fiance, Levi Johnston's "agent" while he is negotiating book deals and movies. And it is reported that Butler is also representing Levi's mom, Sherry Johnston on her 6 felon drug charges. Also, Butler has admitted he paid for The Johnston family's trip to New York to hit all of the talk shows recently. Oh, what a tangled web these democrats weave!