The Face Of Democrat Insanity 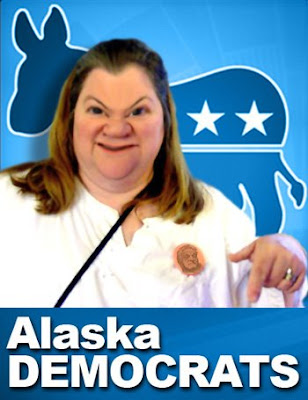 You know, the definition of insanity is doing the same stupid thing over and over, and expecting different results. With that in mind, some Alaska democrats have earned a lifetime stay in a padded cell.

Folks even remotely knowledgeable about Governor Sarah Palin know all about the epic failures Alaskan democrat bloggers and their operatives have experienced in their attempts to smear the Governor. Currently they are batting 16-0 with their ridiculous "ethics complaints." 17-0 if you count the failed "troopergate" attempt. Details are here, here, and here.

So what does Alaska’s official DNC blogger, Linda Kellen Biegel, have up her sleeve now? Well, she’s cooking up another ethics complaint, of course!

You might remember all of the commotion this hateful gal caused when she posted a photoshopped image of Governor Palin and her youngest child. It led everyone to ask why is it OK for democrats to attack small children, especially when they are the children of conservatives.

You’d have thought she’d learned her lesson from the fallout David Letterman experienced after his series of insults aimed at the Governor’s 14 year old daughter. But again, we are talking about the clinically insane here.

Biegel, who blogs as the Celtic Diva eventually took the photo down, and now has pages worth of explaining posted. That’s something else democrats are really good at. They will insult you in the most vile ways, and then "apologize" or "explain" things to you. But mostly they’ll just tell you that you aren’t smart enough to understand the nuance of discussing the rape of a 14 year old girl or how photoshopping a picture of a down syndrome child is some sort of high art form.

And of course, all of them band together to express their outrage when called on their hatefulness. Democrats are the do as I say, not as I do party.

As you know, Biegel, who is rapidly becoming a laughing stock in the sane world, used the image of Governor Palin and young Trig Palin as part of a fund raising effort she has ongoing. She is raising funds to file more insane ethics violations complaints, of course, and says so on her blog. Now, she refuses to disclose donors names, and claims this is not a "political fund" so she doesn’t have to follow the law on this sort of thing. Or file the proper paperwork.

Ironic, because she wants to use this money in an effort to "gain more transparency" from Governor Palin.

No really, I’m not making this stuff up!

So what is Alaska’s self appointed "ethics chief" caterwauling about now?

Well, people who keep up with the Governor will tell you that she made a trip this weekend to visit Alaska National Guard troops during a training exercise off the coast, and then spent time at Camp Bondsteel Ferizaj, Kosovo and then visited wounded troops at Landstuhl Regional Medical Center in Germany.

This is Governor Palin’s second trip abroad to visit her Guard troops. In 2007, not long after she was elected, she traveled to Kuwait and then Germany.

Funny thing, that wasn’t an ethics violation back then. But of course, she wasn’t the odds on favorite to unseat Barack Obama in 2012 either.

At any rate, as Commander-In-Chief of the Alaska National Guard, Sarah Palin was well within the scope of her duties on this trip. And as Maj General Craig Campbell, who accompanied the Governor on the trip pointed out in this interview, Governor Palin takes these duties quite serious.

It seems our poor misguided Diva now fancies herself a constitutional scholar. Of course so do these two!

Was able to pull this off of her website:

Found this on palingates (emphasis mine):
Frank said...

Isn't it just a doozie that Palin would violate a US Supreme Court Decision - and top it off with having our soldiers violate military directives!"

Now I won’t even pretend to be a constitutional scholar, even though it seems that pretty much anyone can get away with saying so! But I will claim that I have a reading comprehension at or above the third grade level.

Without quoting chapter and verse, here is a synopsis of the case:

"Fort Dix, a federal military reservation devoted primarily to basic training for newly inducted Army personnel, and over which the Government exercises exclusive jurisdiction, permits free civilian access to certain unrestricted areas. However, post regulations ban speeches and demonstrations of a partisan political nature and also prohibit the distribution of literature without prior approval of post headquarters. Pursuant to these regulations, the commanding officer of Fort Dix rejected the request of respondent candidates for President and Vice President to distribute campaign literature and hold a political meeting on the post and the other respondents, who had been evicted on several occasions for distributing literature not previously approved, were barred from reentering the post. Respondents brought suit to enjoin enforcement of these regulations on the ground that they violated the First and Fifth Amendments. The District Court issued an injunction prohibiting the military authorities from interfering with the making of political speeches or the distribution of leaflets in areas of Fort Dix open to the general public, and the Court of Appeals affirmed. "

So basically this case was about the distribution of partisan election materials without prior approval. The case was upheld. It states that a military commander MAY restrict political speech as well as printed material. MAY is the key word here. Maybe it’s too many years pouring over the old NHRA rule book, but one tends to learn what words like "may" and "shall" and "must" mean.

The ruling goes on to leave us with this gem:

"As to the regulation governing the distribution of literature, a military commander may disapprove only those publications that he perceives clearly endanger the loyalty, discipline, or morale of troops on the base under his command, and, while this regulation might in the future be applied irrationally, invidiously, or arbitrarily, none of the respondents even submitted any material for review, and the noncandidate respondents had been excluded from the post because they had previously distributed literature there without attempting to obtain approval."

Now you can watch Governor Palin’s speech to the troops, but unless you are a complete loon, or a member of the Obama Administration, a Governor thanking her troops for their hard work and sacrifice is hardly "dangerous" to the troops loyalty, discipline or moral! In fact, from the loud cheers she elicited from the troops, I’d say the Governor was a great boost to moral!

So where does this leave us?

Well, as we know, Linda Kellen Biegel is a seriously deranged woman void of all reason or self-restraint. So you can bet she is cooking up a way to file this ethics complaint! Of course, she may not do it herself. She has many surrogates like Andree McLeod or Sondra Tompkins, or Theodore "Chip" Thoma!

But her MO will be the same as always. Before she even files the paperwork, or gives it to a "designated hitter" to file, the details will be all over the internet. All of the various blogs will put it out, and the three hate bloggers from the Huffington Post, Amanda Coyne (whose husband conveniently works at the Anchorage Daily News), Jeanne Devon (AKMuckraker) and Shannyn Moore will most certain have star placement over at Arianna Huffington’s rag.

You know, these people are why we cannot get good and decent men and woman to take part in the democratic process in our country. Just as soon as a real leader emerges, folks like Biegel, and the rest pull out their tattered copies of Saul Alinsky’s "Rules For Radicals" and go to town.

It seems that all liberals are given a copy of the old communist "community organizer" from Chicago’s book, at birth.

So far, these miscreants have cost the state of Alaska around $300,000 and have run up a personal legal tab of around a half million dollars for Governor Palin.

What can you do?

Get involved! This woman is an official blogger for the Democrat National Committee. She is also endorsed by the democrat party of Alaska. And enjoys a premium placement on their official website.

Conservatives 4 Palin has a great list of contacts that you can get in touch with. One can certainly ask them if this sort of economic terrorism is something they really want to endorse. Or for that matter, see it used against them in the future. More and more conservatives are reading Alinsky these days!

You can also help spread the word through friends and on the various blogs you frequent. If nothing else, when these loons try to come out with this "complaint" everyone will already know that it is bogus!

And one thing more, this isn’t just about Governor Palin. These aren’t the only underhanded democrat operatives out there. Even if you aren’t one of Governor Palin’s strong supporters, remember this, if they’ll do this to her, sooner or later, they’ll do it to someone you do care about! This sort of character assassination and economic terrorism is standard operating procedure for the modern democrat party. Just ask David Axlerod or Rahm Emanuel!

This is as good a time as any to draw a line in the sand! Enough is indeed enough!

I’ll leave you with this thought from Pastor Martin Niemöller the German anti-Nazi activist:

"In Germany they first came for the Communists,

and I didn't speak up because I wasn't a Communist.

Then they came for the Jews,

and I didn't speak up because I wasn't a Jew.

Then they came for the trade unionists,

and I didn't speak up because I wasn't a trade unionist.

Then they came for the Catholics,

and I didn't speak up because I was a Protestant.

Then they came for me —

and by that time no one was left to speak up".

It is a time to choose.