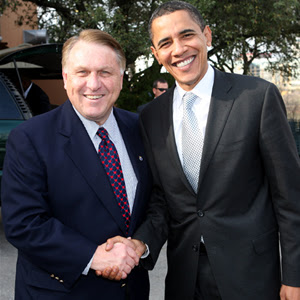 As you know, on Monday, while giving a speech with President Barack Obama, union thug leader Jimmy Hoffa, Jr screamed "We’re ‘Army’ Against Tea Party; ‘Let’s Take These Sons of Bitches Out’."

This would be shocking if not for the fact that it's standard fair for the thugs who run and manage unions. It's not the rank and file, hell, most are union members simply because they live in slave states that force them to join a union in order to work. It's the cost of having a job. And not all unions are run by thugs, but the vast majority are, and the most powerful are joined to Obama at the hip.

We've all seen how Obama has stolen from shareholders of car companies, only to give it to the unions, and how his justice department has harassed non-union shops. This is crony capitalism at it's worst.

Today Sarah Palin addresses this by talking directly to union rank and file members, and reminding them thugs like Hoffa are living off their dues, without doing anything for them in return:

In my speech on Saturday in Iowa, I said: "Between bailouts for Wall Street cronies and stimulus projects for union bosses’ security and ‘green energy’ giveaways, [Barack Obama] took care of his friends. And now they’re on course to raise a billion dollars for his re-election bid so that they can do it all over again." This was shamefully on display yesterday at President Obama’s taxpayer-funded campaign rally in Detroit. In introducing the President, Teamsters President James Hoffa represented precisely what I was talking about as he declared war on concerned independent Americans and on the freshman members we sent to Congress last November by saying, "Let’s take these son-of-a-bitches out!"

What I say now, I say as a proud former union member and the wife, daughter, and sister of union members. So, as a former card-carrying IBEW sister married to a proud former Laborers, IBEW, and later USW member, please hear me out. What I have to say is for the hard working, patriotic, selfless union brothers and sisters in Michigan and throughout our country: Please don’t be taken in by union bosses’ thuggery like Jim Hoffa represented yesterday. Union bosses like this do not have your best interests at heart. What they care about is their own power and re-electing their friend Barack Obama so he will take care of them to the detriment of everyone else.

To the same degree Americans are concerned about irresponsible, greedy corporate execs who got cushy bonuses from taxpayer-funded bailouts, we should also be concerned about greedy union bosses who are willing to tank our economy just to protect their own power. As union history shows, power and greed corrupt. Just because you claim to represent union members doesn’t mean you are on the side of the angels. The greed of too many of these union bosses has all but destroyed the labor movement in this country, helped chase away our jobs, and is killing the American dream.

To see where this leads, look at what’s happening to the working class in our industrialized cities. These cities are going to hell in a hand basket thanks to corruption, crony capitalism, and the union bosses’ greed. The union bosses derive their power from your union dues and their promise to deliver your votes to whichever politician they’re in bed with. They get their power from you, and yet their actions ultimately hurt you. They’re chasing American industry offshore by making outrageous, economically illogical demands that they know will never work. And now that they’ve chased jobs out of union states, they’re trying to chase them out of right-to-work states like South Carolina, so eventually the jobs will leave America altogether. But these union bosses will still figure out a way to keep their gig, and so will their politically aligned corporate friends. As long as these big corporations have a good crony capitalist in the White House, they can rely on DC to bail them out until the whole system goes bankrupt, which, I am afraid, is not very far off. When big government, big business, and big union bosses collude together, they get government to maximize their own interests against those of the rest of the country.

So, now these union bosses are desperately trying to cast the grassroots Tea Party Movement as being "against the workingman." How outrageously wrong this unapologetic Jim Hoffa is, for the people’s movement is the real movement for working class men and women. It’s rooted in real solidarity, and not special interests and corporate kickbacks. It represents the needed reform that will empower workers and job creators. We stand with the little guy against the corruption and influence peddling of those who collude to grease the wheels of government power.

This collusion is at the heart of Obama’s economic vision for America. In practice it is socialism for the very rich and the very poor, but a brutal form of capitalism for the rest of us. It is socialism for the very poor who are reduced to a degrading perpetual dependence on a near-bankrupt centralized government to provide their every need, while at the same time robbing them of that which brings fulfillment and success – the life-affirming pride that comes from taking responsibility for your own destiny and building a better life through self-initiative and work ethic. And Obama’s vision is socialism via crony capitalism for the very rich who continue to get bailouts, debt-ridden "stimulus" funds, and special favors that allow them to waive off or help draft the burdensome regulations that act as a boot on the neck to small business owners who don’t have the same friends in high places. And where does this collusion leave working class Americans and the small business owners who create 70% of the jobs in this country? Out in the cold. It’s you and your children who are left paying for the cronyism of Obama and our permanent political class in DC.

Ask yourself if the folks you heard demonize concerned, independent Americans yesterday really speak for the working class when they’re all too happy to burden your families with the bill to bail out the President’s friends on Wall Street.

We should not forget that for all his lofty rhetoric, President Obama is a Chicago politician. Graft, cronyism, and quid pro quo are the well-known methods of an infamous Chicago political machine, of which Barack Obama emerged. This corruption isn’t just the result of a few bad apples. It’s the nature of a skewed system that’s typical of one not allowing a level playing field. If one desires opportunity for all, then the only solution is sudden and relentless reform. I know of what I speak. I too served in public office in a state that had a corruption problem. The difference is that I fought the corrupt political machine. Barack Obama used the machine in his state to advance. He never challenged it. And he’s evidently brought the same Chicago "pay-to-play" practices to the White House.

It’s sad to see much of the labor movement fall lock step behind a President whom Hoffa calls upon to partner in "waging war" against patriotic Americans. I will never forget that as a governor, in trying to be a friend to the working men and women in our unions, I gave a speech on August 27, 2008, at the annual AFL-CIO meeting in Anchorage. There, union members humbled me with a standing ovation for fighting the corruption in Alaska and for bringing parties together for progress on energy development projects. Then just two days later I landed on the national stage as John McCain’s running mate, and the union leadership turned on me from that day forward even though I had not changed one iota in my plans, principles, vision, and commitment to jobs for working class Americans. The only difference was I was challenging the politician the union bosses were committed to electing. It was almost comical, this lesson learned with their new spots revealed so quickly.

Recently someone commented: "I’m a union member. I’ve been a Democrat all my life. Now I’ll vote for anyone with a plan to save America." I know what that person is feeling. I want all good union brothers and sisters to know that there is an alternative. The grassroots, independent Tea Party Movement articulates a real alternative rooted in free men and free markets, not the cronyism of Barack Obama and the permanent political class in DC. Their cronyism is why we have no job growth, massive unsustainable debt, and a housing market in the tank. Too many politicians are simply addressing the economic symptoms instead of fighting the underlying disease. The path forward is through reform. On Saturday, I outlined some ideas about that reform, and I will continue to do so.

In the meantime, good union brothers and sisters, don’t let Hoffa tell you what to do. He doesn’t represent the real interests of working men and women. He’s not doing you any favors. He’s just living off your paychecks.

Crony Capitalism is a huge problem in government and both parties practice it at both the federal and the state level. Heck, what am I saying, it's even done at the local level. This sort of corruption has permeated our society. We've come to take it for granted, which is wrong, wrong, wrong. When we have Presidents, and Governors working to enrich their big money supporters, at the expense of others, we have a serious problem.

Of course, just making the rich richer isn't the only thing a corrupt politician can do for their buddies. As Michele Malkin writes today, candidate Obama promised to end a federal probe into Teamsters Union corruption. President Obama made good on that promise.

This sort of thing is why the American economy is in a mess. Government picking winners and losers at every level is not only corrupt, and immoral, it goes against everything America stands for. Everything our founders fought and died for.

We must reform the way Americans work.

Here's a bit of video of Hoffa and how he operates: [H/T: Gulagbound.com]

We all remember how the purple shirted SEIU thugs attacked Kenneth Gladney in St Louis for simply being a Black man selling Tea Party stuff at a town hall event. This is who these people are.

We've been called terrorists, racists, and now sons-a-bitches, by some of the most violent elements of our society. Unions were built on violence and intimidation. Businesses that fought unions were violently attacked, and workers who wouldn't submit to union slavery were violently attacked.These unions are nothing more than government sanctioned organized crime.

We talk a lot about the Ruling Class in America. It's not just the permanent political class, it's union leadership and other special interest groups, that buy politicians off. This happens at every level of government. Local, state, and federal. It must be stopped. The American people must rise up and support sweeping reform.

One of the reasons we support Sarah Palin so strongly is the fact she has taken on corrupt politicians and crony capitalism since her very earliest days in public office. Twenty years ago she was going after her fellow Wasilla city council member over crony capitalism, she would do this throughout her time as a public servant.

The story of how she took on the entire corrupt Alaska Republican Establishment™ is well documented.

We need someone who will go after corruption no matter where or when they find it. Even if it's a friend who is engaged in the impropriety, like Sarah's friend, mentor, and fellow city council member Nick Carey was in Wasilla.
Posted by Gary at 12:58 PM