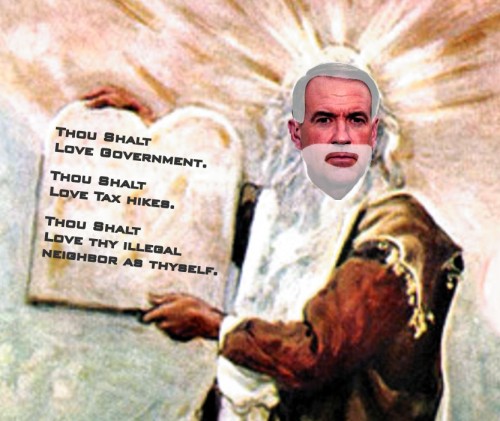 Mike Huckabee, the Mitt Romney of the South, talks a good game, and says all of the right words, but truth be told, he is what is known as a "compassionate conservative." In other words, he is somewhat conservative on social issues, but a Big Government progressive on everything else.

Much like his fellow traveler, Mitt Romney, Huckabee is known for skillfully sticking his finger to the wind, and following which ever direction that wind takes him at the time.

This video, from Huckabee’s State of The State address given on January 11, 2005, shows Huckabee discussing the need for scholarships for illegal aliens. After all, he says, it's not their fault their parents broke our laws. You'll notice he never says "illegal" but continually refers to "status." Typical weasel words from a typical politician.

From the text with the video:

Huckabee announces his desire to give scholarships to illegal aliens in

Huckabee doesn't say "illegal aliens". He uses the word "status". But a newspaper account makes clear his intentions, "Illegal aliens would be eligible for state taxpayer-funded college scholarships and in-state college tuition rates under a bill that was endorsed by a committee of the Arkansas House of Representatives on Tuesday. House Bill 1525 by Rep. Joyce Elliott, D-Little Rock, is part of Gov. Mike Huckabee's legislative package. It easily won favor in the House Education Committee, of which Elliott is chairman." (Arkansas Democrat-Gazette 2/23/2005)

Another newspaper account, "Gov. Mike Huckabee, who included the bill in his legislative package, drew a contrast between Wednesday's vote in support of illegal immigrants and the state's handling of the 1957 desegregation of Little Rock's Central High School.’ They took a stand that Arkansas can be proud of,’Huckabee said in describing the House. ‘I think if we had taken a similar one in 1957, it would have made us proud for a long, long time.’" (Arkansas Democrat-Gazette 2/24/2005)

You can read the full text here.

Yeah, I know what you are saying, this was five years ago, but as we all know, these Big Government Statists never really change, they just say whatever it takes to get by, at the time. As we move toward November, and think beyond, it’s not a bad idea to remind ourselves who some of the players are, and what they stand for.

As proven by most of his endorsements, Huckabee tends to talk the talk, but when push comes to shove, he backs the "good old boys" in the party. Caveat emptor.
Posted by Gary at 12:51 AM